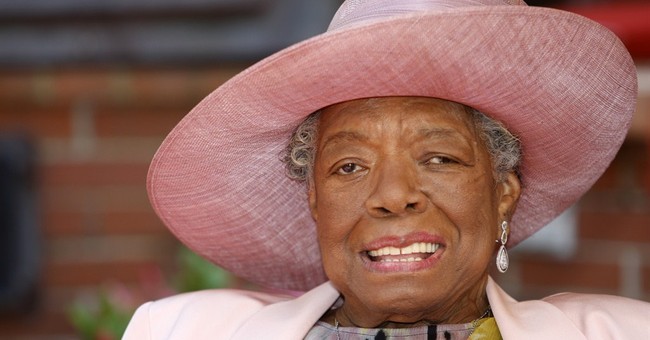 It’s hard to think of a more celebrated American poet and novelist than Maya Angelou. But her achievements were not limited to her literary works, although they are perhaps what she’s best known for. After all, she was a talented actress, dancer, professor, filmmaker, screenwriter, historian and civil rights activist. She was also a “trailblazer,” paving the way for other writers to break down racial barriers and glass ceilings in order to achieve literary and artistic greatness. And don't forget: her invitation by President-elect Bill Clinton to recite an original poem at his first presidential inauguration was an important moment in our nation’s history. Only one other poet, Robert Frost, had ever before spoken at a presidential inauguration.

Sadly, however, she passed away today at her home in Winston-Salem, NC, according to the Associated Press:

Angelou received over 50 honorary degrees during her lifetime and was a 2011 recipient of the presidential Medal of Freedom. But her rise to international acclaim is equally if not more inspiring. She grew up in the Jim Crow south, overcoming segregation, racism, sexual assault and single-motherhood to become one of the most celebrated writers of our time. She never even went to college. "I created myself," she once said. "I have taught myself so much.” Her best-selling memoir, “I Know Why the Caged Bird Sings,” became a national bestseller. Her poetry, too, was commercially successful.

For what it's worth, here are a few of her most famous, moving and memorable quotations:

“It’s one of the greatest gifts you can give yourself, to forgive. Forgive everybody.”

“You may not control all the events that happen to you, but you can decide not to be reduced by them.”

“Try to be a rainbow in someone’s cloud.”

“No sun outlasts its sunset but will rise again and bring the dawn.”

The significance of her life, including how her words and actions influenced everyone from U.S. presidents to everyday people, cannot be overstated. RIP.