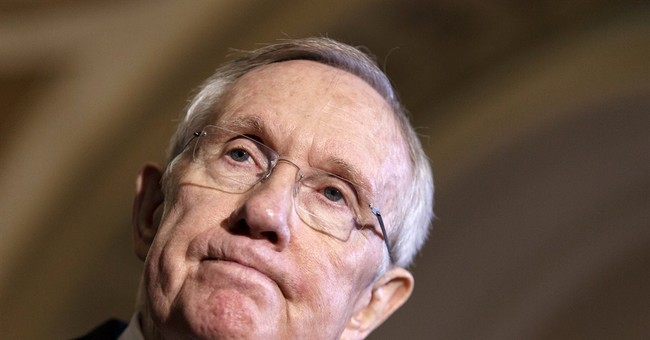 Apparently slingin’ rhetorical arrows at the Koch brothers from the Senate floor isn’t working out all that well. So you could say Congressional Democrats are stepping up their game

Serious question: What surprised you most? The fact that Harry Reid and Nancy Pelosi screened an anti-Koch documentary at the Capitol Visitor Center last night of all places or that “Koch Brothers Exposed: 2014 Edition” is a real film? Actually, don’t answer that question. If you’ve been paying close attention to the Senate Majority Leader’s incoherent mutterings finely-crafted speeches lately, neither one of these things should really surprise you:

The show must go on — unless it breaks congressional rules.

Rep. Candice Miller, the chairwoman of the House Administration Committee, wrote to Minority Leader Nancy Pelosi on Monday saying a scheduled film screening of an anti-Koch brothers movie in the Capitol Visitor Center is violating House and Senate rules.

The screening for “Koch Brothers Exposed: 2014 Edition” is scheduled for Tuesday evening and both Pelosi and Senate Majority Leader Harry Reid (D-Nev.) will participate in a question and answer session for the film.

But, in letter obtained by POLITICO, Miller (R-Mich.) wrote that she has “several serious concerns” that using the Capitol Visitor Center for the film “may cross the line into partisan politics.”

Rules created by the House and Senate committees charged with administration of the Capitol complex state that “no audio visual presentations in the CVC may premiere, preview, showcase, or publicize a film.”

“We cannot hold partisan political rallies or fundraisers on the grounds of the Capitol, or within its walls. Our work in this hallowed building must solely be in the interests of the American people and not into the interests of any political cause,” Miller wrote.

A Pelosi spokesperson disagreed. She argued that the film was not “screened” in the traditional sense, but rather "shown" in “clips” at a press conference where these types of activities are legal. Sure.

Meanwhile, progressive billionaire Tom Steyer recently gave the Senate Majority PAC (read: Senate Democrats) a cool $5 million. Remember, though, that’s a “clean” donation. Why? Because it will go towards keeping the Koch brothers in check -- that is, from “trying to buy” our democracy, or whatever.