Kay Hagan: Dear Republicans, My Opponent Once Said Obamacare Was “a Great Idea” 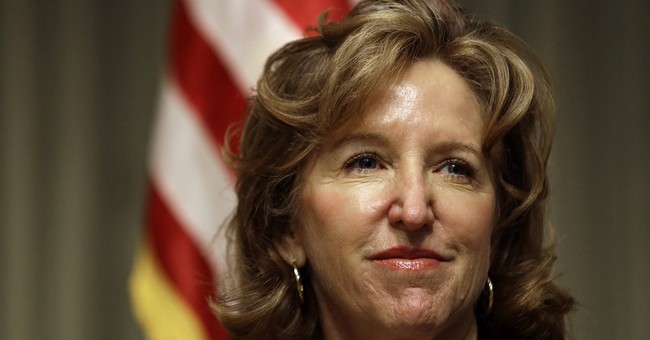 How desperate are Senate Democrats? So desperate, in fact, that one pro-Obamacare incumbent is now sending mailers to Republican primary voters reminding them that one of her many challengers (endorsed by Mitt Romney) once praised the Affordable Care Act.

Behold, the party of ideas, my friends.

Of course, it’s a deceptive and risible strategy, which Sen. Kay Hagan (D-NC) hopes will weaken the establishment (and perhaps most electable) Republican candidate in the race. But all she needs to do is scare enough primary voters into dropping their support for the GOP frontrunner, Thom Tillis, so a less electable candidate gets the nod. If and when that happens, winning re-election will become significantly easier, or so the thinking goes.

It’s a strategy straight out of the Claire McCaskill playbook (via WaPo):

The fliers landed in the mailboxes of Republican voters here last week with a warning likely to unnerve many conservatives.

Thom Tillis, the Republican front-runner for a U.S. Senate seat, once called President Obama’s health-care law “a great idea,” the mailer said. The assertion echoed recent radio ads that also seem to question Tillis’s adherence to the orthodoxy of a party that has made its opposition to the Affordable Care Act a centerpiece of its midterm-election strategy.

But the warnings didn’t come from any of the seven opponents Tillis will face in Tuesday’s GOP primary, where he has been regularly attacked as not conservative enough. Instead, they were paid for by Sen. Kay Hagan, a Democrat who will face the eventual GOP nominee in November.

Hagan supports the health-care law but she is taking the unusual step of spending money on advertisements designed to appeal to Republican voters who are skeptical of the measure. The maneuver is apparently intended to undermine enthusiasm in the GOP base for the Republican who is considered her strongest potential challenger in November.

That’s rich coming from a Senate Democrat who, as a matter of public record, supported the Affordable Care Act, and parroted the ‘if you like your health care plan, you can keep your health care plan’ lie repeatedly. No matter. Those facts are largely irrelevant to Team Hagan as they aggressively maneuver to water-down the competition. The message Sen. Hagan is sending to GOP primary voters is clear: Thom Tillis once claimed Obamacare was an awesome idea, so don't vote for him! This is an absurd and misleading claim, which left-leaning Politifact has already labeled “Mostly False.”

For the record, here’s what Tillis actually said, as reported by the Washington Free Beacon:

The Tillis quote was taken from his February 6 appearance on the Bill LuMaye radio show. You can check out the full audio here. The quote in question takes place around the 9-minute mark.

Here’s what Tillis said, in the context of broader GOP efforts to repeal Obamacare: “The majority of the stuff that is in Obamacare is bad, because it’s not fiscally sustainable. It’s a great idea that can’t be paid for.”

He went on to describe Obamacare as a “policy that’s creating as many problems as it fixes in terms of healthcare,” and “creating the most devastating problem of a deficit that we can’t afford.”

Does that sound like a ringing endorsement of the Affordable Care Act? No. Leave it to vulnerable Democrats, however, to maximize their chances of winning re-election by falsely portraying anti-Obamacare Republican candidates as champions of the law.

Sadly, though, this isn't the first time this has happened.