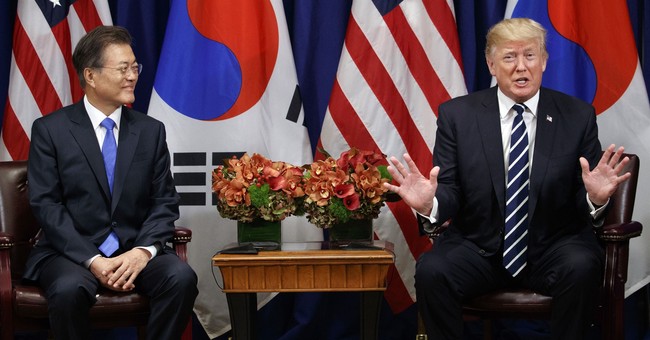 South Korean President Moon Jae-in is on his way to Washington to meet with President Trump. His visit comes just a few weeks before Trump's planned summit with North Korean leader Kim Jong Un. A few media outlets, like The Washington Post, surmise that Moon's surprise trip suggests the talks between the U.S. and North Korea are "faltering."

The summit was full steam ahead until the past couple of weeks, when Kim Jong Un threatened to cancel their plans because of U.S.-South Korea joint military exercises. Moon had helped orchestrate the summit between Trump and North Korea, but now he's en route to the White House in hopes of salvaging the summit, according to experts.

“This time last week, Moon was coming here with the intention of trying to heavily script what Trump would do in his meeting with Kim,” said Victor Cha, who served as senior Asia director at the National Security Council in the George W. Bush administration. “Now, he’s coming here just to try to save the summit. The mission has really changed.”  (Washington Post)

Should the summit go off without a hitch and Trump manage to help usher in the denuclearization of North Korea and an official peace treaty between the Koreas, the Nobel Peace Prize may be calling, according to experts and even some news anchors. Yet, others say that Trump has unrealistic expectations and agreed to the summit much too quickly.

Trump did receive some kudos however, for sending his then-Secretary of State nominee Mike Pompeo to North Korea to meet with Kim Jong Un over Easter weekend. That meeting produced a few stunning photos of the officials shaking hands. It was a surprising bit of diplomacy that suggested productive things to come.

The U.S.-North Korea summit is scheduled for June 12 in Singapore.