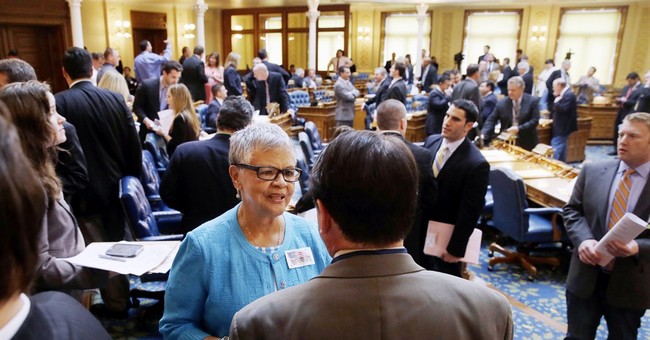 Rep. Bonnie Watson Coleman's (D-NJ) new bill is called the Stop Online Ammunition Sales Act of 2015. You can't get any clearer than that.

The proposed legislation, introduced Tuesday, would require individuals trying to purchase a firearm online to present a photo ID to authorized ammunitions dealers in person.

So much for the “online” part.

Another provision in Coleman's makes things a bit more complicated for ammunition vendors:

The bill would also require ammunition vendors to report any sales of more than 1,000 rounds within five consecutive days to the U.S. attorney general if the person purchasing ammunition is not a licensed dealer.

Coleman defended her bill as a way to prevent mass shootings:

“This is a common sense safeguard that would give law enforcement the tools to identify suspicious activity and hopefully prevent a mass shooting,” she said, referencing the 2012 movie theater shooting in Aurora, Colo. that killed 12 people and injured dozens more. “(James) Holmes changed that town forever with an immense stockpile of ammunition that he purchased online. Without better regulation of ammunition purchases, we risk watching another individual do the same thing.”

As Breitbart points out, the Colorado shooting occurred in a gun-free zone, a policy which Democrats overwhelmingly support, where mass ammunition is not as necessary considering victims can not shoot back.

Coleman may also have unveiled this bill for very personal reasons. In 2002, her sons were arrested for armed robbery. I can see why this mother would be passionate about passing legislation that she thinks would prevent such illegal and dangerous behavior, but her method is a bit extreme. Responsible gun owners shouldn't have to suffer for her sons’ mistakes.

Americans may prefer purchasing a firearm online for several reasons. For starters, it is a rather inexpensive method and just plain convenient for gun owners who don't live in areas that are physically accessible to arms dealers. As for amassing ammo, any gun owner will tell you that 1,000 rounds is nothing when it comes to target practice.

I doubt Coleman will let the voices of everyday gun-toting Americans get in the way of her agenda, however.