New Documentary Claims Reagan Had Ties to the Mob 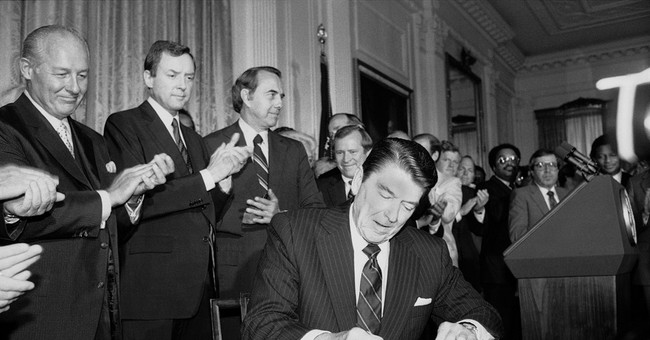 Did you know President Reagan was involved in a scandal that "dwarfed Watergate?" This, according to a participant in the documentary, Wages of Spin II: Bring Down The Wall, produced by Philadelphia filmmaker Shawn Swords. The film is full of startling revelations about Ronald and Nancy's supposed ties to the mafia. The Daily Mail was given exclusive screening to the "chilling" documentary, which revolves around Lew Wasserman, the former head of the Music Corporation of America:

But there was a dark side to Wasserman - and to Reagan - all of which is revealed in a shocking new documentary, Wages of Spin II: Bring Down The Wall, that, according to the film's producer and those interviewed, links both of them in darkly shadowed ways to the Mafia, and the killing of a U.S. Department of Justice organized crime Strike Force investigation into Mob influence and infiltration at the highest levels of MCA.

Many remember that, before moving into the Oval Office, Reagan hosted the General Electric Theater on CBS, an American anthology series that aired every Sunday evening. But, Wages of Spin insists there was a scandal brewing behind the camera:

What viewers didn't know was that Reagan was given this new opportunity of visibility and stardom in a highly lucrative and rare deal. Along with a big paycheck, he was made part-owner of the popular program that he hosted for eight years, making him extremely wealthy.

The documentary includes interviews with former veteran federal prosecutors who insist the MCA-Mafia probe was shut down by "certain individuals in D.C." because Wasserman and the MCA helped launch Reagan's career.

In an exclusive interview, one prosecutor admits he has "no evidence" these charges against the president are true. Despite these allegations being pure speculation, Swords wasn't shy in sharing what he thought of the 40th president:

'Reagan's whole career in politics was subsidized by them and helped him financially because for a long time he was living above his means. MCA backed every political campaign he ran. That's the shocking history -- that MCA was prevalent in his career and that they did so much quid pro quo for each other.'

'Ronald Reagan was an opportunist. His whole career was guided by MCA -- by Wasserman and [MCA founder] Jules Stein who bragged that Reagan was malleable, that they could do what they wanted with him.

'That thing about Reagan being tough on [organized] crime -- that's a fallacy.'

Oh, and don't think Reagan's wife Nancy was safe from Swords' wrath. He claims Nancy Reagan was "the driving force behind Reagan. The mob was probably working her too. She was the one who was pushing him into everything."

A few questions for Mr. Swords and anyone else involved in this documentary: Why is this "breaking news" story just coming out now? To taint the image of one of America's most beloved presidents?

I for one refuse to believe that all of President Reagan's accomplishments were only made possible because of some connection to the mob. He earned his way to Hollywood after first paying his way through college and taking humble jobs at local radio stations. He believed in the dignity of hard work and it's just hard to imagine he would rely on the mafia to get ahead.

I'm not sure if this documentary has a feasible plot, but it certainly has an agenda.