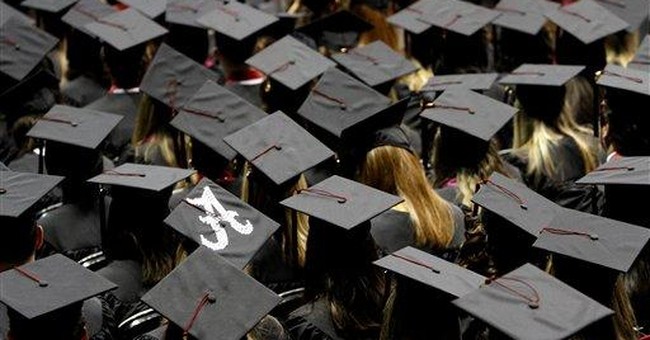 Ronald Nelson from Memphis, Tennessee, is a senior at Houston High School. He was accepted to all eight Ivy League schools--that's Harvard, Yale, Princeton, Dartmouth, Columbia, Brown, Cornell, and UPenn--along with Johns Hopkins, Stanford, and Vanderbilt, among a few other schools. While any of these schools are fantastic options, Nelson made headlines for another reason: he turned them all down. Nelson will be attending the University of Alabama this fall, as a member of the school's honors program.

While it may seem shocking that a student would turn down a prestigious university for a state school, Nelson actually showed impressive maturity and financial foresight with his college choice. Unlike every other school he was accepted to, Alabama offered him a full merit scholarship and waived his out-of-state fees. None of the Ivies offer merit scholarships. As Nelson plans on attending medical school, he figured that he'd rather get a head start on saving money for that rather than take on student loans for undergrad.

After some thought and consideration of all the schools' offers, Nelson decided it wouldn't be worth the financial strain to use this money on his undergraduate education. He plans on going to medical school after college, and knows he'll be faced with more tuition costs.

Bravo. If a person has aspirations of a graduate school, there is absolutely no reason to go in to debt during undergrad if it can be avoided. If Nelson is able to maintain the level of academic success he had in high school, he'll have no problem getting in to a quality medical school.

Additionally, Nelson is likely doing himself a favor by removing himself from the Ivy League's notorious pressure-filled atmosphere. College is a place to learn, yes, but America's elite schools have turned students in to, as one Yale professor called it,"Excellent Sheep."

The average member of the class of 2015 is graduating from college with over $35,000 in debt, which is a number that continues to rise with each graduating class. It's incredibly wise for Nelson (and, well, any student entering undergrad this year) to avoid that debt if at all possible.