Woman Beheaded in Oklahoma By Coworker 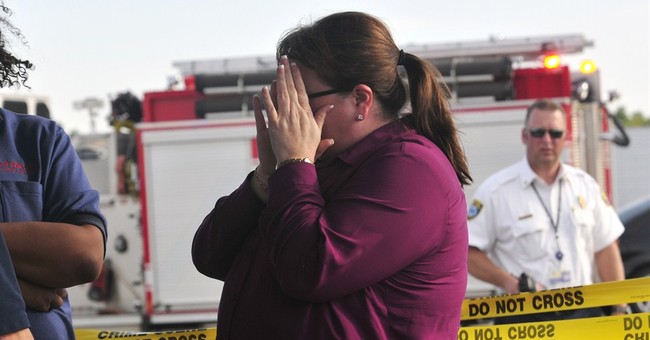 Some terrifying news out of Moore, Okla.: Today a woman working at the Vaughan Foods Inc. distribution center was beheaded by her coworker, who then proceeded to stab another coworker before being shot and wounded by the owner of the plant. He is expected to recover.

The assailant was identified as Alton Nolen. He was reportedly fired from the plant for attempting to convert employees to Islam. Nolen himself was a recent convert and had apparently discovered the religion while in prison.

The beheading victim was identified as Colleen Hufford, 54.

A fired Oklahoma food processing plant employee who proselytized for Islam beheaded a co-worker and seriously injured another before the owner of the plant shot and wounded him, police said Friday. Moments after Alton Nolen, 30, was let go from Vaughan Foods in Moore, he drove to another part of the facility and walked into a front office where he attacked 54-year-old Colleen Hufford, police said.

He used a "standard" knife — similar to the ones found at the facility — to allegedly behead Hufford. Then, he used the same knife to repeatedly stab Traci Johnson, 43, who suffered numerous wounds and remained in stable condition Friday, police said. "He obviously was trying to kill her, too," Moore police Sgt. Jeremy Lewis said at a news conference. He added that Nolen had no relationship with either victim, who were simply in his way when he flew into a rage.

Despite Nolen's possible religious motivation behind the attack, the murder is being treated by the Moore Police Department as an act of workplace violence.

.@MoorePolice calling this an incident of "workplace violence," they say the man shot may be possible suspect. #VaughanFoods @OKCFOX

Just absolutely terrifying. My prayers for everyone impacted by this senseless act.