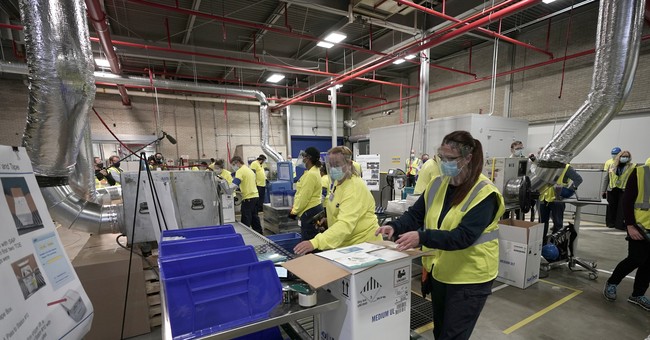 Now that the Food and Drug Administration (FDA) approved an Emergency Use Authorization (EUA) for Moderna's Wuhan coronavirus vaccine, the drug manufacturer is preparing to ship the vaccine across the nation.

Employees in Olive Branch, Mississippi are packaging up nearly six million doses of the Moderna vaccine so it can be distributed to all 50 states.

Moderna’s vaccine is currently being boxed up for distribution. ?? pic.twitter.com/dK1EKZwBLK

"We're getting a look inside that pharmaceutical distributor, McKesson. They're here handling this monumental effort for Moderna," ABC News' Gio Benitez reported. "We are seeing teams suiting up in cold weather gear, going into those freezers, where the vaccines are kept at -4 degrees. They are packed and then loaded onto those trucks."

Moderna has a shipping advantage because the vaccine is being packaged for distribution in Olive Branch, Mississippi, which is 30 minutes south of Memphis, Tennessee, the FedEx world hub. Being in close proximity to the world hub makes distribution logistically easier.

By the end of the month, Moderna is planning to ship a total of 20 million doses of the vaccine. More doses will be produced in the coming months. Pfizer also plans to distribute another two million doses of their vaccine this week, bringing the total to 10 million Wuhan coronavirus vaccines this week alone.

Health care workers, nursing home and long-term facility residents, and those with a higher risk of contracting the coronavirus are on the top of the priority list for receiving the vaccine. Members of Congress are also receiving the vaccine because of U.S. Presidential Policy Directive 40 (PPD-40) which ensures "continuity of governance" during a national emergency.

So far, Vice President Mike Pence, Second Lady Karen Pence, Sens. Lindsey Graham (R-SC), Elizabeth Warren (D-MA), Ed Markey (D-MA), Marco Rubio (R-FL) and Rep. Alexandria Ocasio-Cortez (D-NY) have received the vaccine. Not only is this being done to ensure the health and wellness of Congress – so they have the ability to legislate – but also to be an example to the American people. It is a way for them to show confidence in the vaccine, especially at a time when Americans are reluctant to get the COVID vaccine.

The Moderna vaccine's distribution is considered another win for Operation Warp Speed. The White House's goal was to research the Wuhan coronavirus, develop a vaccine, run successful trials, create millions of doses and adequately distribute the vaccine.

According to United States Army Gen. Gus Perna, the chief operating officer of Operation Warp Speed, the first 2.9 million doses of the Pfizer vaccine were distributed to every state and territory last week.

"This week in total, between Pfizer and Moderna, we have allocated 7.9 million doses of vaccine and we are ready for that distribution," Perna said in a statement. "We will ship simultaneously to all 64 jurisdictions and five federal entities. Jurisdictions have already ordered the vaccine and we know it is going to 3,700-plus locations. With more requests coming in every day based on allocations."

The first deliveries of the Moderna vaccine are scheduled to take place early Monday morning.