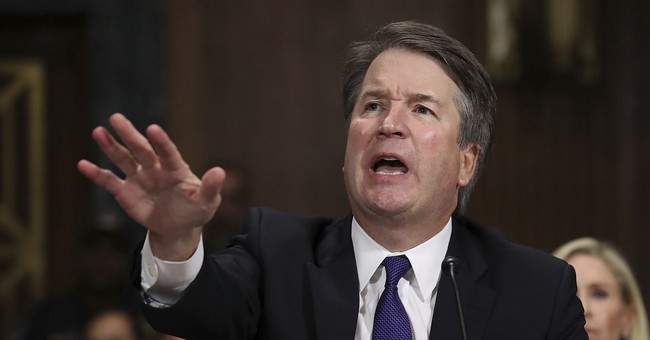 Those are the words on Kavanaugh's July 1st entry in 1982. And, according to Sen. Sheldon Whitehouse (D-RI), it could be the key piece of evidence in the FBI's investigation.

“This may — may — be powerful corroborating evidence that the assault happened,” Whitehouse said Friday. “That it happened that day. And that it happened in that place.”

Whitehouse used a blowup copy of Kavanaugh's calendar for a visual aid. He added "BK" for Kavanaugh and circled it, along with Mark Judge and Patrick "PJ" Smith's names as people Ford identified in her allegations.

"Here's Kavanaugh's calendar. Dr. Ford said that Kavanaugh and Judge and PJ and at least one other boy were all at a house," Whitehouse said, holding up the calendar.

"Well, we know Brett Kavanaugh was there 'cause it's his schedule. And here's Judge and here's PJ," he said, circling their names. "Here are all those three named boys and others at a house together just as she said."

Whitehouse reminded the audience of Ford's testimony where she alleges that both Kavanaugh and Judge were drunk and that "she had a beer."

"Skis is brewskis," Whitehouse explained as he circled the word. "Beer. They were drinking. Just as she said."

The most interesting aspect of Whitehouse's remarks: he believes Kavanaugh documented what he did that summer after it had already taken place.

"I will concede that the two girls aren't mentioned – but spot me this: if – if you had just sexually assaulted one of the two girls, would you had the two girls' names to your calendar?" Whitehouse asked. "I doubt it."