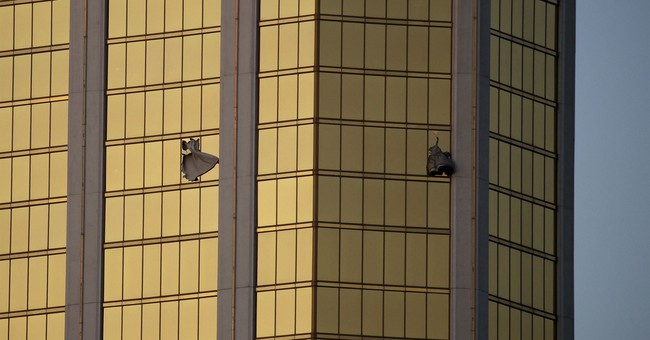 Too many rumors are swirling around regarding the tragedy in Vegas from Sunday night. Let me start by dispelling with some of the questions floating around on the internet:

1.  How did he get that many weapons into his room without being noticed?

A: With a luggage cart and ten suitcases over 3 days.

2.  How did he fire off that many rounds without training?

A: A monkey can pull a trigger; and, who says he didn't have practice?

3. How was he able to kill that many people in such a short time?

A: He had 11 minutes firing on near full-auto (using a bump fire device) into a crowd of people that had no idea where the fire was coming from.

A: First, he was a psychopath. Clark County Sheriff Joseph Lombardo said it best, "No Ma'am, I can't get into the mind of a psychopath at this point."

Second, he probably thought he would be there for an extended period of time and perhaps thought he would heat up one or more guns. Maybe he wasn't good at changing magazines? Again, first answer is always a fit. Seriously, how can we apply reason to a psychopath?

5. How did he get his hands on fully automatic firearms?

A: Investigation has determined that he had bump fire or slide fire devices on 12 of his firearms, which make them sound like a full-auto and operate much like a full-auto. They are approved by the Bureau of Alcohol, Tobacco, Firearms and Explosives and are easily available (until now).

6.  How was he able to remove a window with 800 pounds of hurricane glass without training? (I know, seriously, this was a question.)

A: With a hammer.

A: With an elevator and luggage cart.

8.  What about the sounds of gunfire coming from other directions?

9. How does one man come to own $100K worth of weapons without being noticed?

A: He was rich.  As far as what we know right now, all guns were purchased legally over a period of time from multiple vendors.  Every dealer and serious collector at a gun show has that many or more, and they are not psychopathic mass murderer candidates.

10: How is it possible that he killed/injured so many in such a short time...without training?

A:  He was able to fire uninhibited an unreported number of rounds into a massive crowd, where he couldn't miss hitting something. When we know more, it is likely that many of the injuries were not from gunfire but from the panic that ensued. However, considering the rate of fire and the mass of the crowd, it wouldn't be the least bit unreasonable to think that 50-70% of the bullets hit something.

11. What gun laws could have prevented this?

A: None. He had no criminal background.

12. What about laws preventing mentally ill people from getting firearms?

A: How does one accurately measure another's current mental stability or future propensity to become a psychopath among the group of every potential firearm purchaser?

13. What about the unidentified and unverified woman who told the crowd that a lot of people were going to die?

Possible answers: 1. It is made up nonsense. 2. She was drunk.

14. What about the shots coming from other floors?

15. How did the shooter manage to record a video of himself?

Finally, some questions for the conspiracy theorists.

How do hundreds of law enforcement officers secretly conspire to cover up evidence in one of the nation's worst modern massacres?  What would be their motivation? Would conspiracy advocates be satisfied when they see video evidence of the shooter by himself committing the act and ending it by putting a gun in his mouth?

I could go on, but you get the picture.  Please folks, stop with the conspiracy insanity and let the investigators do their jobs.  Seriously, just stop.

RELATED: Hillary's Running Mate: Vegas Massacre Was Stopped Because The Shooter Didn't Have a Silencer

RELATED: Former FiveThirtyEight Writer: After I Got The Data, Support For The Gun Control Policies I Liked 'Crumbled'

RELATED: What Authorities Found in the Vegas Shooter’s Home