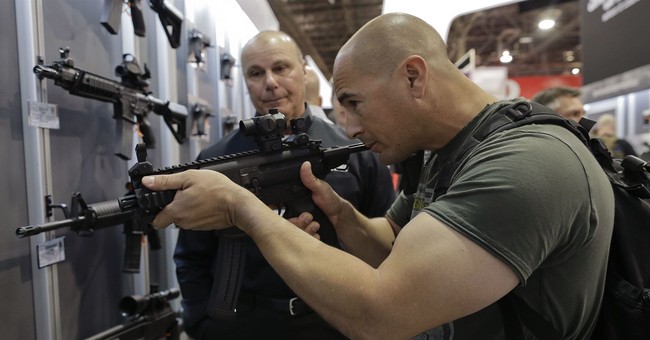 Every year, the National Shooting Sports Foundation (NSSF) hosts SHOT Show, the annual tradeshow for firearms industry insiders. The goal of the meeting is to allow firearms manufacturers, dealers and industry-related media to gather and see what guns, accessories and the latest gadgets will be released in the next year.

"NSSF has run the Shooting, Hunting and Outdoor Show for 40 years, 20 of which have been in Las Vegas. There is an extensive area devoted to the law enforcement community and to programs and services related to public safety and to that of our customers. You have to be a member of the industry to attend. It is not open to the public," Michael Bazinet, NSSF's Director of Public Affairs, told Townhall. "We have significant security and safety protocols in place, as we do every year."

To make sure attendees are safe, all firing pins are removed from guns on the show floor, trigger guards are instituted and live ammunition is banned.

The Associated Press decided to write up a general article about what takes place at SHOT Show. The author's headline, however, is very misleading.

The headline implies that the shooting industry is not being sensitive to the victims of the Las Vegas shooting, which couldn't be further from the truth. In fact, SHOT Show has taken place in Vegas for roughly 20 years. It wasn't like the Las Vegas shooting occurred, and the NSSF decided to suddenly change the location to stomp on victims and their families.

"The exhibitors and attendees are well aware of the tragedy and feel genuine sympathy for the victims. But they know that the lawful commerce in firearms serving millions of law-abiding citizens is completely unconnected to the actions of a criminal intent on doing harm," Bazinet said.

Bazinet is right. There are millions of law-abiding gun owners across the country. We utilize our God-given, Constitutionally protected, Second Amendment rights.

Just like with everything, there are a few bad apples who try to ruin it for the rest of us. In this case, they're called criminals. And guess what? They're going to do everything in their power to get their hands on a weapon — whether it be a gun, knife or bomb — if they're looking to cause bloodshed.

Breaking Down the Nonsense

Some of the "facts" and quotes in the Associated Press' article are far beyond laughable. (Emphasis added below is mine.)

The gun industry is holding its biggest annual trade show this week just a few miles from the site where a gunman slaughtered 58 concertgoers outside his high-rise Las Vegas hotel room in October using a display case worth of weapons, many fitted with bump stocks that enabled them to mimic fully automatic fire.

Gun control advocates, meanwhile, pointed to the irony of the location and planned a protest to renew calls for tighter gun sale regulations, including expanded background checks.

So, which is it? Are gun control advocates protesting SHOT Show's location or are they calling for stricter gun control laws? Sounds like they knew firearms were going to be in the building, so they decided to plan a protest just to say they did.

What exactly will be among the thousands of products crammed into the exhibition spaces at the National Shooting Sports Foundation’s SHOT Show convention, running Tuesday through Friday, will be a bit of a mystery, shielded from the public and, this year, members of the general-interest media.

Actually, if you take a look at a host of social media accounts, you'll see just what's at SHOT Show. Gun manufacturers, accessory businesses, distributors and members of the firearms media are frequently posting what's being displayed at the expo.

Here are just a few examples:

What turned our heads on the show floor at #SHOTShow2018? Here are a few products to watch for:https://t.co/G2abBGUw5a pic.twitter.com/yy6rBbTy7Q

#SHOTShow2018 is off to a great start. Lots to look at & lots of new technology for LEO’s and our DOD. pic.twitter.com/Zm6DjVM3mE

During "Industry Day at the Range," firearms-related media also had the opportunity to test out new guns that are dropping on the market.

A look at the new Glock 19x and the brand new GEN 5 Glock 26 with Ashley Rheuark from Team GLOCK. @GLOCKInc #shotshow2018 #SHOTShow @nssfshotshow

Interested in the new #Ruger PC Carbine? Get the details on this versatile, takedown PCC seen at #SHOTShow2018 here:https://t.co/o27OhIic1o pic.twitter.com/XqnTiaVstq

The Reformation from @FranklinArmory looks like an SBR but it's not an NFA item. Stay tuned to learn more! #shotshow #shotshow2018 #ar15 #franklinarmory #rangeday pic.twitter.com/3PaDBIvRZR

Just because the NSSF has decided to limit the number of people who attend the expo doesn't mean that what's behind those doors is a secret. It means the organization is doing everything in their power to make sure people are safe. Allowing anyone and everyone onto an exhibit floor, like you would at a craft fair, is a flat out dumb idea. If anyone could walk into SHOT Show, we know gun control advocates would storm into the middle of the event to cause chaos. Protestors would get into attendees faces and blame them for tragedies like the Las Vegas shooting.

The Flaws in the Most Common Gun Control Argument

Gun control advocates always make the same few arguments. The most common one is about the "gun show loophole" that really doesn't exist.

Kristin Brown, co-president of the Brady Campaign and Center to Prevent Gun Violence in Washington, D.C., accused events like the SHOT show of adding to the national problem of weapons and violence.

“We’re allowing it to exist,” Brown said, “and we’re doing almost nothing to address the loopholes in the law that allow private sales to happen at gun shows and over the internet.”

One of the most annoying arguments that gun control advocates try to make is the "loophole" argument. Clearly, none of these people have ever attempted to purchase a gun before. Here's how things actually happen:

Say you're in the market for a new 9mm concealed carry handgun. You decide to check out Gun Broker's website. You find a gun you like at a reasonable price and decide to purchase the gun. You don't click "add to cart," check out and suddenly the gun is shipped to you. There's a process.

You have to purchase the gun from a federal firearms licensed dealer, commonly referred to as an FFL. You still go through the National Instant Background Check System (NICS). If you fail to pass the background check, you don't get the firearm. Period.

In fact, websites like Gun Broker require FFLs to send in copies of their license so the website knows the people selling the firearms are actual gun dealers and not selling on the black market.

The same thing holds true for gun shows. In order to purchase a firearm, you still have to go through an FFL. There are private parties who meet at gun shows; but, legally, they're required to go to an FFL to go through the transfer process.

The Associated Press' reporting of SHOT Show is nothing short of shoddy. It's obvious the reporter is a proponent of gun control — or as they like to say, "common sense gun laws." She attempted to make herself seem neutral and unbiased but it's clear she has an agenda.

What this article proves is why so many men and women across the country disproportionality trust the mainstream news media. It's because of the spin factor, like what was used by the AP, to write a story that fit the narrative they wanted to cover.