Robert Kraft Has Another Super Bowl Win, But Also A Sex Crime Charge 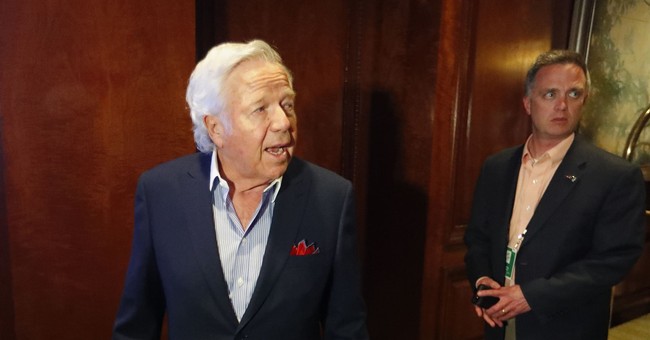 Well, New England Patriots owner Robert Kraft may have won the Super Bowl earlier this month, capping off another milestone in an unprecedented sports dynasty. Yet, that victory might be shrouded in controversy, as he’s been accused of sex crimes. This isn’t your typical prostitution charge. The women alleged solicited by Kraft and others in Jupiter, Florida were part of a human trafficking ring (via Fox News):

Kraft, 77, was accused of paying for sexual acts at Orchids of Asia Day Spa in Jupiter, located about 90 miles north of Miami. His name was among more than a dozen who were charged with him.

Police said they have Kraft, and others, on video receiving the sexual acts and that he participated in prostitution in Florida two separate times.

The spa had been shut down after a months-long investigation revealed women were participating in “sexual servitude,” TC Palm reported, citing arrest records. Nine other spas in Orlando, Palm Beach County and Treasure Coast had also been shut down in part of the investigation.

UPDATE: Kraft denies any illegality through a spokesperson (via WaPo):

It did not appear Friday that Kraft was in police custody. The two prostitution-related charges he faces are misdemeanors, police said.

“We categorically deny that Mr. Kraft engaged in any illegal activity,” a spokesperson for Kraft said in a written statement. “Because it is a judicial matter, we will not be commenting further.”

Kraft eventually could face discipline by the league under its personal conduct policy. Owners are subject to the policy.

In 2014, Colts owner Jim Irsay was suspended for six games and fined $500,000 by the league under the personal conduct policy. Irsay had pleaded guilty to a misdemeanor count of driving while intoxicated after being arrested following a traffic stop. He told a judge that he was under the influence of painkillers when the traffic stop occurred.