Why Paul McCartney Is Everywhere Lately 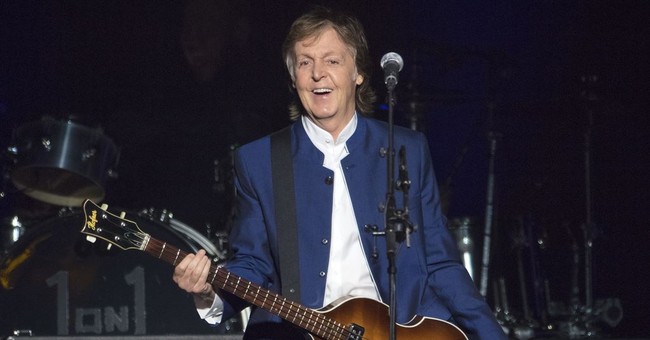 You're never too old to make an album - especially when you're a Beatle. Paul McCartney, the 76-year-old original member of one of the most iconic bands in history, is out with new music this week. And, according to critics, it's pretty good. Not that McCartney needed a reason to be back in the spotlight, but "Egypt Station" has him touring the country, guest starring on about every late-night show there is, and surprising giddy fans with impromptu concerts.

"Egypt Station" got a stellar review from Rolling Stone. The music critics admit to being charmed by the album's catchy tunes like "Come on to Me," "Who Cares" and "Fuh You" (yep, you read that right). They add that he also hits the right notes with his new ballads like “I Don’t Know.” But the real gem is “Dominoes.” That track, described by Rolling Stone as "one of those Paul creations that feels both emotionally direct yet playfully enigmatic," is also an instant hit with younger audiences. "Egypt Station" is even a serious contender for the No. 1 album on Billboard.

McCartney has wasted no opportunity to promote his new tunes. In the past few weeks, he's done interviews with GQ, starred in an extended carpool karaoke with James Corden where the host treated him to a trip home to Liverpool (who else would he do that for?), and was recently a guest on "The Tonight Show Starring Jimmy Fallon." In one sketch, he and Fallon surprised elevators full of visitors and he heard the same blood curdling screams from women he was so used to when he was a floppy haired teen crooner.

McCartney has also been delighting fans with his guitar. He performed an intimate, surprise concert at a local Liverpool pub during his taping with Corden, and another two-hour concert in Grand Central station last week, which was livestreamed here, if you're so inclined. Rolling Stone noted that he performed "From Me to You" for the first time in America since 1964.

After all these years, McCartney is still making great music and simply having a great time. His optimism is infectious and it's no wonder he still connects so well with younger generations and why the Beatles music lives on and on and on. I know that for me, when I was 10 or 11, my Britney Spears and *NSYNC CDs were on the same shelf as my Beatles No. 1 hits album.

McCartney is a living legend. If you have the chance to see him in concert, do it. This year, it seems like you'll have plenty of chances. He's barely put down his guitar.

There's no getting around it. We love him...yeah, yeah, yeah.