Oprah and Obama Transcend Race; Or So We Thought

Will Alexander
|
Posted: Nov 11, 2018 12:01 AM
Share   Tweet
The opinions expressed by columnists are their own and do not necessarily represent the views of Townhall.com. 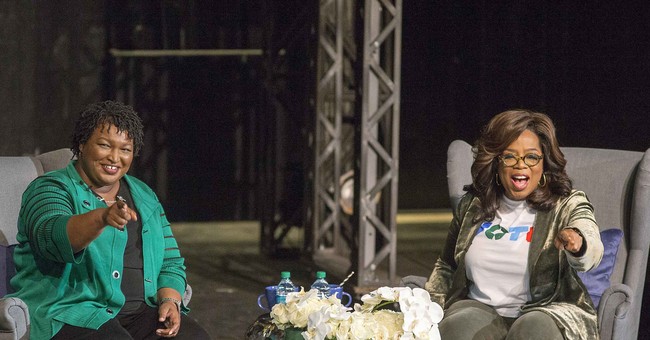 The midterms left us with a lot of things to think about.  One of the most mind-numbing was when Oprah and Obama made it pretty clear that they believe America still oppresses black people.

“All of us may have been created equal,” a preachy Oprah said at her Stacey Abrams rally.  “But if ya woke! If you woke; if you woke just-a lil’ bit – you got sense enough to know that everybody’s not treated equally.  The reality is this: We see injustices – big and small – all around us every single day of our lives.  … (A)s our civil rights predecessors use to say, ‘We shall not be moved!’ … ‘Don’t let nobody turn you around!”

OK, Oprah. So, voting for Stacey Abrams was kind of a civil rights issue, huh?  Pick the other guy, and you’re taking sides with the racists. Got it.

Here’s Obama at his Abrams rally:

“In the closing weeks of this election, we have seen repeated … constant … incessant … non-stop attempts to divide us with rhetoric that’s designed to make us angry, and make us fearful, with images and rhetoric that are designed to exploit our history of racial and ethnic and religious division … to make us believe that things would be better if it just weren’t for those who don’t look like us; or don’t pray like we do; or don’t love the way we do. It’s an old playbook!  Georgia, we’ve seen this before.  I woulda like to think we are passed it.”

Obama went on, essentially equating what he called “conservative retrenchment” against the progressive agenda, with the Bull Connor-types who used dogs and fire hoses to stop black progress in the ‘60s.

It’s deeply puzzling when you hear two immensely successful black celebrities using melodious speech to say that if you’re a conservative, you’re a racist. That if you don’t support government programs that benefit blacks, you’re helping to turn back the clock on civil rights.

Oprah started life with nothing, to become a multi-billionaire in less than a life time of hard work.   Obama began life in a very broken, fatherless home; but it didn’t stop him from being elected to the most powerful office on Earth – twice.

The America that Oprah and Obama complains about is complete fiction when you stack it up against the lives they’ve actually lived.

“If we made it, you can make it, too! Here’s how.” That should be their message. Why do they feel so deeply obligated to politicize black identity?

Shelby Steele, research fellow at Stanford’s Hoover Institution, in his book “White Guilt,” wrote that because of America’s long history of black oppression, whites fear that they are stigmatized as racists simply because of their skin color.  To earn their innocence, they bend over backwards to say and do things that prove they’re not racists.

So with white guilt, it is the fear of being stigmatized as a racist – not goodwill toward blacks – that drives white people, political parties, schools and corporations to be so devoted to the religion of diversity.

Black guilt, I believe, works in a similar way.  Vulnerable blacks fear the stigma of being seen as sellouts; Uncle Tom-types. If something on the surface puts a black person under suspicion of not being authentically black, they become vulnerable.  They feel obligated to prove they’re not sellouts.

Few things arouse that suspicion in the black community like being rich or being biracial – like Oprah and Obama.  Both go to pains to prove their authenticity by speaking broken English, delivering speeches in the cadence of black preachers, and standing up against a black oppression that really doesn’t exist.

In other words, for them to be authentic, they have to be inauthentic.

“It wants to be an activist identity; it wants black protest to be built into each black person’s sense of self.  So, it demands a solidarity (transparency) very similar to what totalitarian societies demand.  It expects many gestures of identification – a liberal politics and a Democratic Party affiliation among them.

“The obvious problem,” wrote Steele, “is that these gestures, which win us solidarity with the group, very often require us to make sacrifices of integrity and principle.   Depending on our background, being transparently ‘black’ can come at the expense of what is important to us as human beings.”

If “blackness” and “liberalism” are synonymous in the mind of the group, then there’s nothing you can do to be “authentically black” if you’re a conservative, or if you support one.   The group excommunicates you.

Don’t believe me? Ask Clarence Thomas.  Ask Kanye West, who is now so maligned with so much profanity by the likes of Calvin “Snoop Dogg” Broadus, that his rants are unprintable. Ask radio talk show host Larry Elder, who is daily dehumanized as a coon. Will Smith called Elder an Uncle Tom in his 2005 rap song, “Mr. Nice Guy.”

Oprah, Obama, please listen:  Unchain yourselves.  Speak the truth aloud, even if that means siding with whites when the guardians of authentic blackness are dead wrong.   If you go to the heart of our noisy politics, it is not “hatred” or “institutional racism,” or “the white man’s system” that drives the differences in the way Democrats and Republicans see our problems.   Democrats and Republicans simply have a different political philosophy over the role of government in our lives. That’s it.  Focus more on that and, please, stop politicizing race.