Give Thanks for a Trump Thanksgiving

Wayne Allyn Root
|
Posted: Nov 24, 2018 12:01 AM
Share   Tweet
The opinions expressed by columnists are their own and do not necessarily represent the views of Townhall.com. 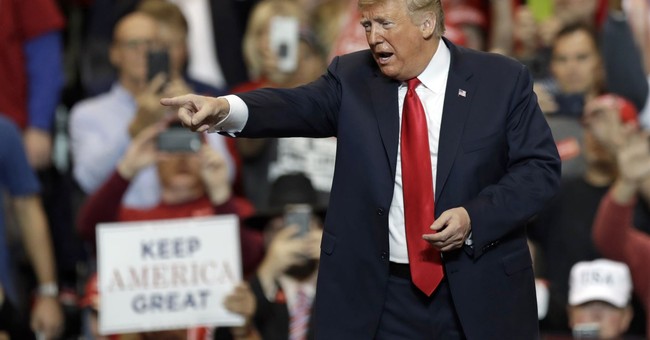 This Thanksgiving, we should all thank President Donald J. Trump for putting an abundance of chickens in our pots and turkeys on our table. How quickly Americans have forgotten what has transpired regarding the nation's economy. Thanks to Trump, this is a prosperous holiday.

The reason is simple: Trump is relentless. No matter how vicious the nonstop attacks by critics, liberal opponents or the media, Trump just keeps going and going like the Energizer Bunny. He has a one-track mind. He doesn't give up or give in. He never admits defeat.

Instead, Trump doubles down. He goes on offense. He keeps coming back at you like Freddy Krueger in "Nightmare on Elm Street." Trump fights relentlessly for America, American workers and American jobs.

There are a remarkable 878,000 new millionaires in the United States to prove his philosophy works. More on that in a moment.

When I was campaigning for Trump to be elected president, I had three key arguments:

First, I argued that Trump is a relentless human being. Trump is a hammer. Everyone and everything else is the nail. We all need to learn from his mindset.

Second, I argued Trump is a tireless and persistent advocate for capitalism, entrepreneurship and job creation. Only Trump could make America's economy great again.

Third, I argued Trump's aggressive attitude and mindset would be contagious. We could all prosper because of Trump.

Trump proved me right. Two recent stories in the media sum up the Trump difference. Sometimes, we all need reminding.

First, because of the booming Trump economy, the United States has gained 878,000 new millionaires in the past 12 months. That's almost 1 million Americans whose lives were changed in a wildly positive way thanks to the president. I guarantee there will be many more millionaires minted over the next six years with Trump as CEO of the U.S. economy.

Overall, U.S. wealth grew 6.5 percent in the past year, according to the Federal Reserve, versus 4.6 percent for the rest of the world. More reason to give cheer this "Trump Thanksgiving."

But it's not just millionaires. Virtually everyone is gaining and prospering under Trump. In Trump's first two years as president, the United States has gained more than 4.3 million jobs. More people are now working than at any time in history. Unemployment is at a 50-year low. Under this president, black and Hispanic unemployment are the lowest in American history.

On this Thanksgiving Day, let's be thankful that Donald Trump is relentless. That he fights for us, not himself. And let's all appreciate the turkey on our table.