Another Republican Capitulation on Health Care

Veronique de Rugy
|
Posted: Nov 08, 2018 12:01 AM
Share   Tweet
The opinions expressed by columnists are their own and do not necessarily represent the views of Townhall.com. 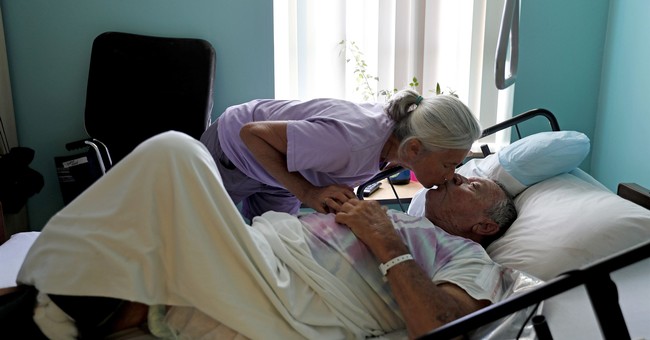 Republicans have established a clear pattern on health care. First, they rail against whatever big-government scheme Democrats propose. Then, after a half-hearted and incompetent effort to convince the public of the benefits of a market-oriented system, they abandon their principles and adopt the big-government idea as their own in order to win or hold power.

The spectacle of Republican candidates tripping over themselves to announce their commitment to preserving requirements for coverage of pre-existing conditions, a key component of the Affordable Care Act (Obamacare) and the mandate most responsible for making insurance unaffordable for average Americans, is one example.

The latest addition is the recent announcement of the Trump administration that it would base Medicare Part B reimbursements on what other countries pay for those drugs.

For years, most Republicans opposed what was referred to as drug reimportation, or the purchasing of American-made drugs sold in foreign markets at lower prices. Their reasoning was both simple and correct. Buying drugs that are cheaper only because foreign governments have enacted price controls would bring all the same downsides as directly setting our own controls, namely scarcity (shortages and waiting lists) and reduced incentives to research and develop new drugs.

The U.S. market is large enough that foreign price controls alone are not a major threat to research and development. In other words, non-Americans freeload on American consumers who fund the bulk of new drug development. But nothing can insulate non-Americans from the other problems of price controls, which is why newer lifesaving drugs are less available in countries like France and the United Kingdom. And the United States, alas, has no other market on which to freeload. If we destroy the most innovative drug market in the world, then it simply means there will be less innovation and more preventable deaths.

The White House correctly calls out foreign governments for their nonsensical drug policies, which hurt their consumers even though, thanks to the United States, they aren't paying the full price of those bad policies. Unfortunately, the president's idea of "confronting" them by mimicking their policies here at home leaves much to be desired and will have negative and long-lasting consequences.

Medicare Part B covers drugs purchased and administered by physicians, so cancer drugs, vaccinations and the like would all be affected. But the program isn't likely to stop there. The rules are being developed by the Center for Medicare & Medicaid Innovation, another Obamacare creation that Republicans have frequently criticized. CMMI was created to facilitate government experimentation with different health care payment models, with the ultimate goal of spreading them across the entire market. Once controls are in place, it's all but inevitable that they will be expanded to cover all drugs under Medicare and then beyond, whenever the next Democratic government is in place, if not before.

None of this is to say that the status quo is desirable. Where drug prices are most egregiously high, there's inevitably some government policy restricting competition. And Medicare is not market-based in its current construction. The answer, however, is not to further manipulate the market and manipulate prices but to remove excessive burdens imposed on the health care sector by misguided regulation and provisions that shield drug manufacturers from competition.

Two days before the White House announced its plan to import foreign prescription-drug socialism to the United States, its Council of Economic Advisers ironically warned that "socialism is making a comeback in American political discourse." How right they are!