Little Sisters of the Poor
Opinion

God Chose Her to Be a Beggar

Tom Purcell
|
Posted: Mar 26, 2019 12:00 AM
Share   Tweet
The opinions expressed by columnists are their own and do not necessarily represent the views of Townhall.com. 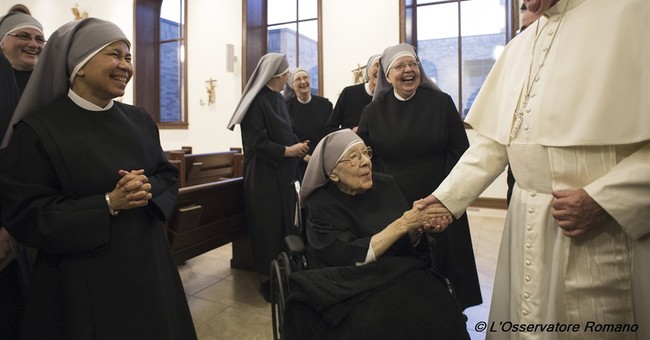 Sister Margaret Mary didn't think she was up to the job.

Nine years ago, during her 40th year of religious service, she had been assigned the most difficult role of her life: full-time beggar at the Little Sisters of the Poor retirement residence in Pittsburgh.

Little Sisters of the Poor (LSP) is a Roman Catholic order founded in France in 1839 by St. Jeanne Jugan. Its mission is to care for the elderly poor in their last chapter of life. Today, 172 LSP homes in 31 countries serve nearly 12,000 aged poor.

The sisters vow poverty, chastity, obedience - and hospitality. You won't find a more cheerful or meticulous environment than an LSP home.

Since its founding in 1872, the Pittsburgh home has given love, dignity and care to more than 10,000 elderly poor, enabled by a fundraising tradition that St. Jeanne originated nearly two centuries ago: Sisters literally beg for support.

The alms that "begging sisters" seek from local merchants, benefactors and churchgoers are essential. In the U.S., Medicaid only covers 30 percent of each home's cost. The alms cover the remaining 70 percent.

Which brings us back to Sister Margaret.

She'd done her share of begging over the years - the sisters always go out in pairs, and she often accompanied the lead begging sister - but never expected to lead a collection program.

She first volunteered at an LSP home during her eighth-grade year in Arizona. The moment she walked inside - the moment she began caring for its residents - she fell in love with the order's mission and knew God had called her to serve.

Her parents were delighted by the news. You see, eight months before her birth, her parents had lost her infant brother to a tragic birth defect. When she announced she was giving her life to God, her mother said, "God gave you to me and your father to help us heal from the loss of your brother. Now he wants you back!"

In 1965, just before her 18th birthday, Sister Margaret began a whirlwind mission that would take her to Europe, Asia and several stops in the U.S. She studied hard to prepare, including training as a registered nurse (and later becoming a certified dietary manager).

Though she preferred providing hands-on care to LSP residents - few things bring her more joy - her organizational talents led her to a variety of management roles abroad and in the U.S. Following her standard of "Do whatever God requests of you," she took on many difficult duties in a spirit of humble service.

Outwardly confident, Sister Margaret admits to inwardly being a bundle of nerves around people she doesn't know. Lead begging sisters are often spirited and persuasive - skills that didn't come naturally to her. She dreaded the role, but after prayer and reflection, she humbly accepted her next assignment in 2010.

It turns out she was born to do the job. Building on the Pittsburgh home's already robust collection program, Sister Margaret's organizational skills doubled donations.

Today, she greatly enjoys being the lead begging sister. Next year, she hopes to celebrate a decade in that role - and 50 years as a Little Sister of the Poor.

We live in a time of great anger and cynicism. Newspaper headlines suggest we're coming apart at the seams.

But for every headline that makes us doubt our future, 10 headlines go unwritten - headlines about people whose daily sacrifices and heroism bring great beauty to our world.