Cold Reminds Us of Importance of Dependable Energy

Tom Harris
|
Posted: Jan 12, 2018 12:01 AM
Share   Tweet
The opinions expressed by columnists are their own and do not necessarily represent the views of Townhall.com. 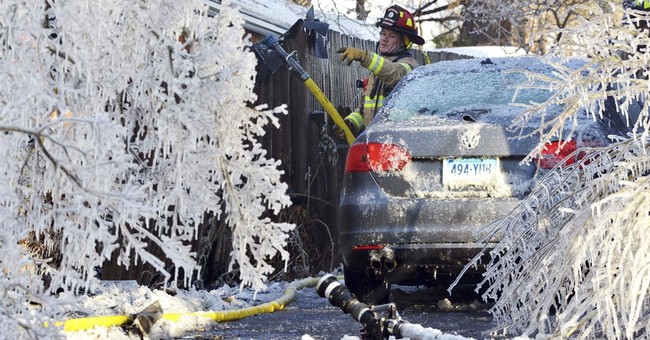 Following the recent record-setting low temperatures, the importance of reliable, abundant, and inexpensive energy is now more obvious than ever. It was certainly appropriate that the 2017 National Security Strategy (NSS), released on December 18, three days before the start of winter, emphasized energy security.

To “Promote American prosperity” and “Advance American influence,” two of the four vital national interests identified in the NSS, the Trump administration asserts that “our Nation must take advantage of our wealth in domestic resources.” And one of the most important of its domestic resources, one America is no longer taking full advantage of, are its vast coal reserves, the largest of any nation on Earth.

Testifying on Nov. 28 at the Environmental Protection Agency’s (EPA) public hearing on the withdrawal of the Clean Power Plan in Charleston, W.Va., Robert E. Murray, president and CEO of Murray Energy Corp., summarized the bleak state of affairs:

“Prior to the election of President Obama, 52% of America’s electricity was generated from coal, and this rate was much higher in the Midwest. That percentage of coal generation declined under the Obama Administration to 30%. Under the Obama Administration, and its so-called Clean Power Plan, over 400 coal-fired generating plants totaling over 100,000 megawatts of capacity were closed with no proven environmental benefit whatsoever.”

Much of this was driven by Obama’s determination to be seen to be contributing to “arresting climate change,” to quote from his 2015 NSS, by mandating severe reductions of carbon dioxide (CO2) emissions from power plants. Unbelievably, Obama’s 2015 NSS listed “Climate change” ahead of “Major energy market disruptions” in its “list of top strategic risks to our interests.” That made no sense. Climate is, and always will be, variable. There is nothing we can do to stop it.  And many scientists do not support the hypothesis that our CO2 emissions will cause dangerous climate change.

Regardless, recent climate change has been unremarkable and clearly does not constitute a national security threat in comparison with a lack of affordable, reliable energy to power the nation and export into world markets. President Donald Trump was right to make only passing reference to climate change in the 2017 NSS.

Even in the unlikely event that CO2 emissions were a problem, developing countries, the source of most of the world’s emissions (China currently emits about twice as much as does the U.S.), are not following Obama’s lead. They understand that they must continue to aggressively build coal-fired power plants to meet their growing electricity needs. The New York Times admitted (“As Beijing Joins Climate Fight, Chinese Companies Build Coal Plants,” July 1, 2017):

“Chinese corporations are building or planning to build more than 700 new coal plants at home and around the world, some in countries that today burn little or no coal, according to tallies compiled by Urgewald, an environmental group based in Berlin…Over all, 1,600 coal plants are planned or under construction in 62 countries, according to Urgewald’s tally, which uses data from the Global Coal Plant Tracker portal. The new plants would expand the world’s coal-fired power capacity by 43 percent.”

Similarly, India’s heavy reliance on coal will continue even in 2047, according to the June 16, 2017 report, “Energizing India,” by National Institute for Transforming India (NTTI) and the Institute of Energy Economic Japan (IEEJ). Coal is forecast to rise from its current (2012) 46% of India’s total energy mix to 50% in 2047 in Business as Usual scenario. Even in an “ambitious” scenario in which renewables supply 12% of India’s primary energy (in 2012 it was 3%), coal still accounts for 42% of India’s energy mix.

The authors of the NTTI/IEEJ report state, “India would like to use its abundant coal reserves as it provides a cheap source of energy and ensures energy security as well.”

They are right, of course, so it is a welcomed development that Trump is promoting a resurgence of the American coal industry.

Obama’s dedication to the climate scare contributed significantly to coal’s tragic decline in America. Besides the impact of his Clean Power Plan, a rule that will hopefully soon be withdrawn, coal has been hammered as a result of a 2015 EPA rule that limits CO2 emissions on new coal-fired power stations. The result is that the U.S. can no longer build modern, clean, and efficient coal plants to replace older stations, as is happening in Europe, China, and India. Here’s why:

The 2015 EPA rule, entitled “Standards of Performance for Greenhouse Gas Emissions From New, Modified, and Reconstructed Stationary Sources: Electric Generating Units,” limits CO2 emissions on new coal-fired stations to 1,400 pounds per megawatt-hour of electricity generated. When releasing the new standard, the EPA asserted that it “is the performance achievable by a [supercritical pulverized coal] unit capturing about 20 percent of its carbon pollution.”

This is irrational. CO2 is no more pollution than is water vapour, the major greenhouse gas in the atmosphere. By calling the gas “carbon,” the Obama EPA encouraged the public to think of it as something dirty, like graphite or soot, which really are carbon. Calling CO2 by its proper name, carbon dioxide, would have helped people remember that it is an invisible, odourless gas essential to plant photosynthesis, clearly not a perspective Obama encouraged.

Also, the technology of CO2 capture on a full-scale power plant is still a technological fantasy. So, in reality, the EPA was actually banning even the most modern, very efficient, supercritical coal-fired stations because their CO2 emissions are at least 20% above the EPA limit.

Speaking at the Nov 9 America First Energy Conference in Houston, Texas, keynote speaker Joe Leimkuhler, vice president of drilling for Louisiana-based LLOG Exploration, showed that America has 22.1% of the world’s proven coal reserves, the greatest of any country and enough to last for 381 years at current consumption rates. So, it is a tragedy that America can no longer build modern coal-fired power stations to replace its aging fleet. Clearly, the rule limiting CO2 emissions from new coal-fired power stations must be cancelled as soon as possible.

The climate scare has also impeded coal’s development in the U.S. by restricting its exports. In particular, Asia would be a huge market for inexpensive American coal if sufficient U.S. export facilities were available. But, again, thanks largely to the climate scare contributing to the blocking of construction of coal export terminals, the U.S. exports only about as much coal as does Poland.

To ensure energy security, especially when demand soars during bitterly cold spells and heat waves, and to “restore America’s advantages in the world and build upon our country’s great strengths,” to quote from the NSS fact sheets, the U.S. must expand its fleet of coal-fired power stations and build coal export facilities as quickly as possible. And to make that possible, the Trump administration must do everything in its power to thoroughly debunk the climate alarm that has so crippled coal’s development.

Tom Harris is executive director of the Ottawa, Canada-based International Climate Science Coalition. He writes from a province, Ontario, that seriously damaged its economy by banning all coal-fired power generation.