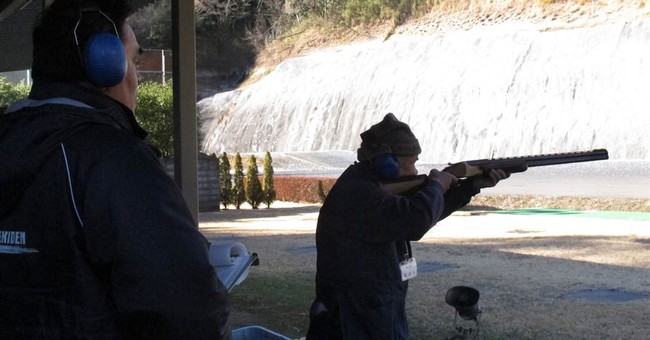 Cole Withrow was just a few weeks from graduating with honors at North Carolina’s Princeton High School. But on Monday, the Eagle Scout and active church member was expelled and arrested after he accidentally left a shotgun in his pickup truck.

The 18-year-old is now facing a felony weapons charge and a precarious future for what most people in the community believe was an honest-to-goodness mistake. “I think it’s an injustice for this young man,” family friend Kimberly Boykin said. “He’s a good guy. He’s loved by his classmates and his teachers. You don’t become an Eagle Scout by being a bad seed.”

She said the school district is sending a very bad message to students. “You teach your kids if you’re in trouble or if you see you’ve done something wrong, go ahead and admit it,” she said. “Be a man and it’ll be fixed. In this case, that’s what he did and he’s being punished for it. That’s not the lesson we need to teach our kids.”

Withrow had spent the weekend camping with a group of his friends, including Boykin’s son. The boys went fishing for catfish on Saturday and skeet shooting on Sunday.

He realized he had left his shotgun in his truck on Monday morning as he reached to grab his book bag, said Boykin.

“He didn’t know what to do,” she told Fox News. “If you jump in the truck and leave, then they get you for skipping school. Once you are there you have to say.”

So the teenager, who did his senior class project on gun safety, locked his truck, walked to the front office and called his mother. That’s when the trouble started.

“He was overheard in a private conversation with his mother explaining what happened,” Boykin said. “He could have told a story, but he told the truth.” A spokesperson for Johnston County Schools confirmed to Fox News that they found the shotgun in Withrow’s locked vehicle.

“The law is very clear when a person knowingly and willingly brings a weapon onto educational property,” spokesperson Tracey Peedin Jones said. “The situation was turned over to law enforcement immediately.”

Boykin said he was also expelled for 365 days – meaning that he will not be able to graduate from high school.

Withrow’s arrest has sparked outrage across this small town, southeast of Raleigh. A Facebook page has been launched to generate support for the boy – and students have launched a Twitter hash-tag “#FREECOLE.”

“He is very honest and respectable and would never intentionally try to hurt anyone,” said classmate Kelcie Thomas. “It was an honest mistake and my whole school is backing him up and supporting him fully.”

The Withrow family is not talking to the media on the advice of their attorney – but Boykin said the family is just heartbroken.

“It’s almost like they are in a fog – something so innocent has turned into this big to-do,” she said. “When you try to do the right thing, you get in trouble.”

The school system is standing by their decision.

“Administration reacted promptly and the proper procedures and protocol were followed,” Jones said. “The situation was turned over to law enforcement immediately. As a result of our investigation, it is our best determination that students and staff were safe at all times.”

Boykin said the problem is that the laws are black and white.

While his future remains unclear, Boykin said an encounter last week sums up the character of Cole Withrow.

“The kids got their caps and gowns on Friday and after school a group of them went to a local Mexican restaurant,” she recounted. “They were being loud teenagers and carrying on – but when the waiter brought their food – the table got quiet. They all bowed their heads and they said the blessing. Cole was one of those kids.”

Boykin said she cried when another mom told her that story.

“They don’t always make the right decisions,” she said. “But I don’t know what other kind of decision he could have made at that point.”

Like many in this town of 1,000 residents, Boykin is dumbfounded.

“Honestly, my heart just broke,” she said. “I know that it was just an honest mistake.”