A Point of No Return? 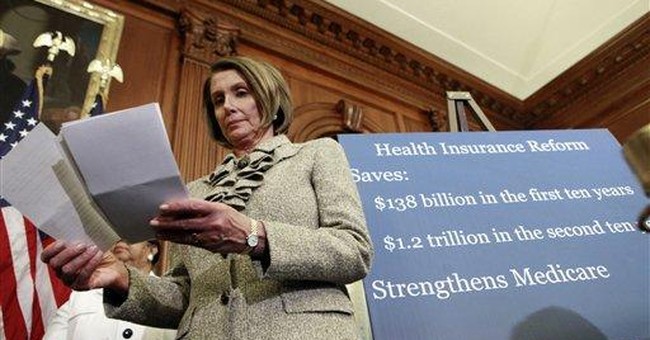 With the passage of the legislation allowing the federal government to take control of the medical care system of the United States, a major turning point has been reached in the dismantling of the values and institutions of America.

Even the massive transfer of crucial decisions from millions of doctors and patients to Washington bureaucrats and advisory panels-- as momentous as that is-- does not measure the full impact of this largely unread and certainly unscrutinized legislation.

If the current legislation does not entail the transmission of all our individual medical records to Washington, it will take only an administrative regulation or, at most, an Executive Order of the President, to do that.

With politicians now having not only access to our most confidential records, and having the power of granting or withholding medical care needed to sustain ourselves or our loved ones, how many people will be bold enough to criticize our public servants, who will in fact have become our public masters?

Despite whatever "firewalls" or "lockboxes" there may be to shield our medical records from prying political eyes, nothing is as inevitable as leaks in Washington. Does anyone still remember the hundreds of confidential FBI files that were "accidentally" delivered to the White House during Bill Clinton's administration?

Even before that, J. Edgar Hoover's extensive confidential FBI files on numerous Washington power holders made him someone who could not be fired by any President of the United States, much less by any Attorney General, who was nominally his boss.

The corrupt manner in which this massive legislation was rammed through Congress, without any of the committee hearings or extended debates that most landmark legislation has had, has provided a roadmap for pushing through more such sweeping legislation in utter defiance of what the public wants.

Too many critics of the Obama administration have assumed that its arrogant disregard of the voting public will spell political suicide for Congressional Democrats and for the President himself. But that is far from certain.

True, President Obama's approval numbers in the polls have fallen below 50 percent, and that of Congress is down around 10 percent. But nobody votes for Congress as a whole, and the President will not be on the ballot until 2012.

They say that, in politics, overnight is a lifetime. Just last month, it was said that the election of Scott Brown to the Senate from Massachusetts doomed the health care bill. Now some of the same people are saying that passing the health care bill will doom the administration and the Democrats' control of Congress. As an old song said, "It ain't necessarily so."

The voters will have had no experience with the actual, concrete effect of the government takeover of medical care at the time of either the 2010 Congressional elections or the 2012 Presidential elections. All they will have will be conflicting rhetoric-- and you can depend on the mainstream media to go along with the rhetoric of those who passed this medical care bill.

The ruthless and corrupt way this bill was forced through Congress on a party-line vote, and in defiance of public opinion, provides a road map for how other "historic" changes can be imposed by Obama, Pelosi and Reid.

What will it matter if Obama's current approval rating is below 50 percent among the current voting public, if he can ram through new legislation to create millions of new voters by granting citizenship to illegal immigrants? That can be enough to make him a two-term President, who can appoint enough Supreme Court justices to rubber-stamp further extensions of his power.

When all these newly minted citizens are rounded up on election night by ethnic organization activists and labor union supporters of the administration, that may be enough to salvage the Democrats' control of Congress as well.

The last opportunity that current American citizens may have to determine who will control Congress may well be the election in November of this year. Off-year elections don't usually bring out as many voters as Presidential election years. But the 2010 election may be the last chance to halt the dismantling of America. It can be the point of no return.