Is This the Best We Can Be?

Terry Paulson
|
Posted: Jan 23, 2017 12:01 AM
Share   Tweet
The opinions expressed by columnists are their own and do not necessarily represent the views of Townhall.com. 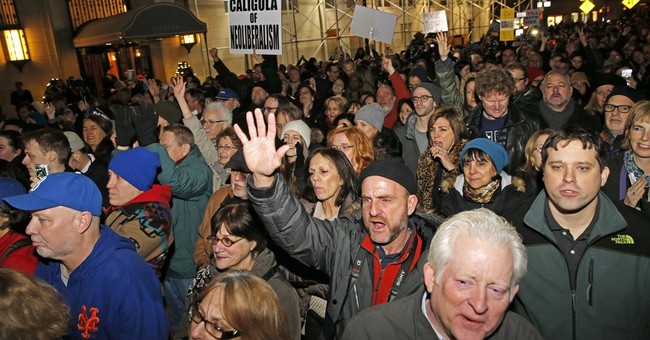 I, along with many on both sides of our political divide, are disappointed in many of our fellow citizens. What is surely your right to say and do as an American is not what is best for our country at this perilous and treasured time of presidential transition. The dignity of the office and the legacy of over two centuries of highly contested democratic elections demands more than hateful rhetoric, inflammatory posts on social media, and disrespectful displays at inaugural events.

Thankfully, many principled and heartfelt Democrats who fought hard against Trump’s election are embarrassed by the disrespect shown to a fairly elected President. They understand the respect that the office of the President deserves in our democratic republic.

If you disagree, write your letters to the President, fight against Trump’s policy changes, march in support of issues you support, fund candidates who you believe can win back the House and the Senate in the mid-term elections. But don’t disrespect the office and your party.

The savage attacks and death threats on Democrats or Independents willing to bridge across our political divide to attend and even entertain those attending the Trump Inauguration hurts Democrats. It only confirms and reinforces the disgust of those who voted for Trump partially because of such public displays.

Do you think conservatives were any less distressed by the election and administration of Barack Obama who wanted to “fundamentally transform America?” From his partisan passage of Obamacare to the early release of the treasonous Army intelligence analyst Bradley/Chelsea Manning, we are so glad to see President Obama leave office. Thankfully, 4,000 of his political appointees who helped put his executive orders into action are also gone.

Yes, strong, even hateful opinions have been expressed against President Obama. There have been demonstrations, as there should be by opponents. But when President Obama was first inaugurated with the resounding applause and adoration of two million of his supporters gathering in Washington, were there hateful demonstrations. There were none. There were no dancing haters outside Vice President Biden’s home.

Many conservatives tried to make lemons into lemonade by celebrating the fact that a black American had been elected negating the myth that America is too prejudiced to do so. So yes, we’re glad he’s gone, but we don’t wish he or his family ill. He was our President, a good father, and an effective campaigner and speaker who will certainly do well with audiences who adore him.

When President Bill Clinton was in office, I along with other professional speakers had the opportunity to meet him in the White House. We were invited but did not feel it likely we would actually see him. When he turned the corner with that great smile of his, he said, “I bet some of you didn’t even vote for me.” There were a few uncomfortable laughs, but he continued, “That’s OK. I’m your President, too.” He went on to explain that no one can understand what it’s like as a President to wake up every morning and face crises and problems from all corners of the globe.”

Clinton challenged us as speakers to be “hope merchants” helping Americans believe that they can still succeed. After that meeting, I could no longer see him in the same light. I didn’t vote for him in the next election, but I wrote a monthly letter to the White House complimenting him when I could and differing where I felt I must.

Today, President Trump wakes up to that same daily list of crises and difficult choices. You certainly have the right to fight to replace him in 4 years and to work against his stated policies and priorities. But what every President needs is our prayerful support and help in keeping America the republic our Founding Fathers envisioned we could be. Support where you can and differ where you must. But let’s live up to our better natures of civil discourse and responsible citizenship in this, our next transition of Presidential power in Washington.