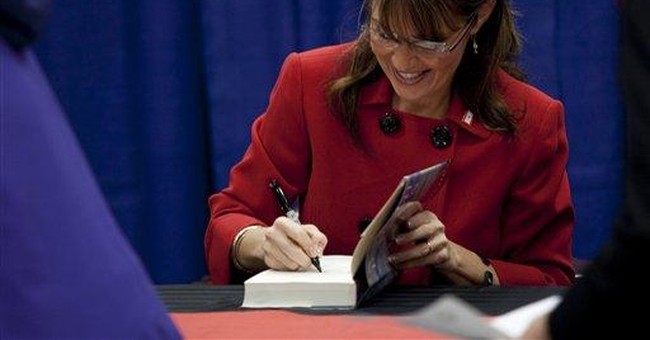 Sarah Palin arouses venom from the left like Hillary Clinton from the right. On the day after her Oprah interview, Richard Cohen in The Washington Post said it was time for "Palintolgy," punning ungallantly on the study of fossils.

In the New York Times, the television critic, writing about her appearance on Oprah, said "she still had the hunted look and defensive crouch" she demonstrated in the campaign. This is pretty much politics as usual. The dominant liberal media can't see beyond their stereotypes.

Dylan Ratigan on MSNBC put Sarah Palin's face atop several female bodies, one in a red, white and blue bikini and another in a tight black miniskirt and high heels. He decreed that "she's hot," not necessarily an insult, but he apologized for the pictures. Newsweek, which runs an Obama cover every other week, put her on the cover this week in running shorts.

Stereotypes of politicians and other celebrities are fair game and sometimes even fun. I once described Palin as the female Republican "Crocodile Dundee," who could wrestle an alligator or shoot and dress a moose and look good doing it. She quotes her father that her resignation as governor was not about "retreating," but about "reloading." Annie Oakley lives.

Beauty (and the beast) may be in the eye of the beholder, but political personalities are shaped by many forces. Palin's memoir "Going Rogue," which is what a John McCain staffer accused her of when she went off their script in talking to a reporter, is how she wants to position herself as an independent thinker, not bound by conventional notions of partisan togetherness, of party or of ideology. She likes the idea that she can duke it out within the Republican Party, not always toeing the party line.

She emphasizes "commonsense conservatism" that she says appeals to a broad spectrum of independents as well as Republicans, drawing on an appreciation of free market values and low taxes. Economic ideas were not her strong point during the campaign, when the Republican ticket never recovered from McCain's limp response to the economic downturn. Nor did she have much to say about foreign policy and was unfairly ridiculed for noting (correctly) that Alaska was close to Russia.

She talks with some ease now about increasing sanctions on Iran and raising troop levels in Afghanistan. She blames her handlers for her poor campaign interviews, but herself for rising to the bait in her interview with Katie Couric. She reckoned, correctly, that the question about which newspapers and magazines she reads was merely condescending to the imagined "Neanderthal atmosphere" of Alaska.

She had, after all, just published an op-ed piece in The New York Times. Nevertheless, her irritation showed her as a novice in the national spotlight and someone clearly not ready for the media hazing of candidates for vice president.

Today she's been granted something of another look as she tries to bring clarity to her past and clear the decks for new ideas. Her campaigning for Republican candidates next year will be closely watched, and she will no doubt accumulate useful IOUs. She will be closely watched as well for whom she turns to for advice on domestic and foreign policy issues. At the moment, she's a stronger talk show host than major political player.

But time and events will polish her mettle, or tarnish it. She needs to show how her natural affirmation of hockey moms and laborer-fathers like her husband can accomplish her goal of a revitalized America. Other public figures have overcome stereotypical derision similar to what she has endured.

Harry Truman was urged to resign no sooner than he was sworn in to make room for "somebody smart." Ronald Reagan was widely regarded by the elites as an "amiable dunce." The tea party crowds are looking for a populist leader who shows a little faith in the decency of the little people and the democratic processes, whom Andrew Jackson called "the humble members of society -- the farmers, mechanics and laborers," who want the obstacles removed that keep them from realizing their abilities.

Matthew Continetti, in his book "The Persecution of Sarah Palin: How the Elite Media Tried to Bring Down a Rising Star," says the time is ripe for a politician with imagination to separate the good populism of free enterprise from the bad populism of loony theories. Palin, he writes, can give voice to those millions who don't want government aggrandizing the powerful and risking fiscal imbalances but "who do want public policies that create the conditions for a general prosperity."

Sarah Palin is poised to move on. Where she goes and how she gets there will determine who follows.