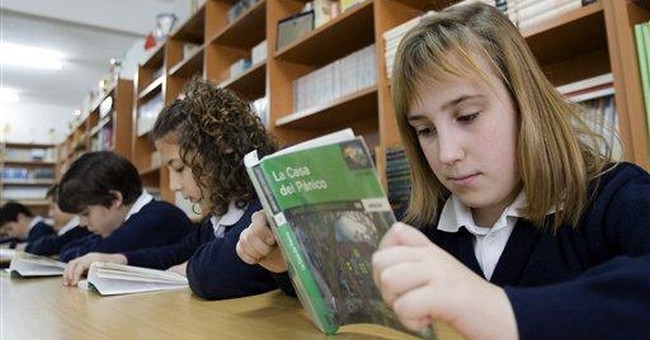 It's a lot later than we think. We're raising an illiterate and uneducated generation, and there's more to come. On April 1, America's Promise Alliance released a detailed study revealing that fewer than half of the teenagers in 17 of the largest U.S. cities drop out of high school before they graduate -- more than 1.2 million of them. The cost of this is enormous: billions of dollars in lost productivity for expensive social services and (because ignorance begets crime) to build more prisons. This report sounded like an April Fool's joke on the growing number of fools, meaning all of us.

The high school dropout resembles the fool depicted on Tarot cards -- standing at the edge of a precipice, with no idea how far he'll fall, when fall he will. It's no coincidence that the number symbol for the fool is a zero. A hundred times zero is still zero.

"When more than 1 million students a year drop out of high school, it's more than a problem, it's a catastrophe," says Colin Powell, the former secretary of State and founding chairman of America's Promise Alliance. His wife Alma chairs the Alliance now. Speaking as the old soldier he is, he describes these statistics as "a call to arms." The Powells are joining Margaret Spellings, secretary of Education, to call for summits in every state to figure out how to halt the decline in graduation rates, as well as to better prepare public school graduates for work and college.

But do we really need more meetings to talk endlessly (and tediously) about shopworn educational ideas and stale theories? Alma Powell answers the question before someone asks it: The summits won't be jabber-jabber sessions. "They will be about action," and demand that local, state and federal policymakers, grass roots communities, parents, students and advocates confront the reality now.

The statistics show what seems obvious to everybody: City kids are far more likely to live on the precipice than kids from the suburbs. The Editorial Projects in Education Research Center finds that graduation rates in city schools are 15 percentage points lower than those in the suburbs. In some cities, the disparity is as wide as 35 percent. It's the kids in the largest cities who can't see the value of an education. Life on the street and the grunt jobs found there ought to make even homework look attractive.

Knowledge is power, and this is the lesson we have to find a way to teach. Only by identifying horrific statistical disparities can we begin to demand change. But, we must be careful about what kind of change to make.

No Child Left Behind legislation has left troublesome, unintended consequences. When the legislation imposed rigid standards, teachers began to "teach to the test" instead of imparting actual knowledge. Secretary Spellings wants to require states to provide more uniform graduation data, but this will require careful monitoring, too. States sometimes inflate graduation rates, so they won't invite sanctions from the federal bureaucrats who dole out the money.

Solutions to the education crisis cannot be determined on a one-size-fits-all basis. We've learned a lot about the different ways different children learn. Older children in kindergarten, for example, generally do better than younger children, so parents have learned to put their kids in schools where the cut-off age puts them in classes with slightly younger classmates. Charter schools offer a choice to parents eager to rescue their children from failing schools and put them in schools emphasizing math, science, arts and languages. Unfortunately, the good charters usually have long waiting lists. The charter movement needs more public support.

The catechism of liberalism inevitably prescribes more money as the key to changing all this, but the real key is how the money is spent. The public schools in the nation's capital spend about $25,000 per student per year, considerably more than a good private school education. Nevertheless, Washington's schools are among the worst in the country. That's why few congressmen send their kids to public schools. In some years, none do.

Dropping out is a fool's errand, but getting children to stay in school requires encouragement from all of us. "A knowledgeable fool," as Moliere observed, "is a greater fool than an ignorant fool." We've been forewarned.