This Just in From Venus: Hillary's The Tough One, Obama's The Nice One 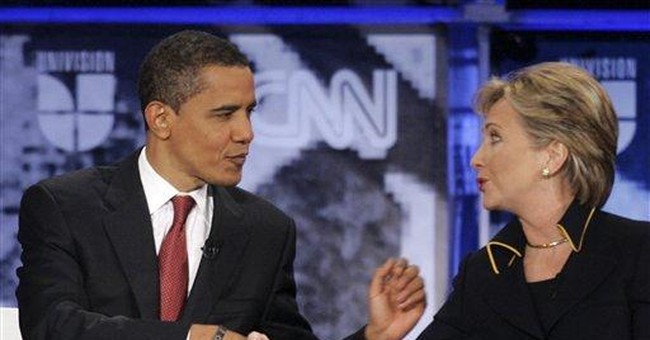 The Democratic candidates have landed, just in from somewhere out there in the stars. The surprise is that Hillary's from Mars, and Barack Obama's from Venus. She's tough; he's nice. She's strident; he's soothing. She insists that she's hard enough -- even mean enough when it comes to that -- and ready to be commander in chief on day one. Obama disagrees, naturally, and says he's ready to cooperate and negotiate with such adversaries as Iran, Syria and Cuba. Maybe even North Korea. He'll win them over with cooing, not confrontation.

The language of the Democratic campaign has become transgendered, upsetting all the traditional notions about the differences between men and women. In his book, " Men Are From Mars, Women Are from Venus" John Gray argues that men are motivated when they feel needed, women when they feel cherished. In the Democratic race for the nomination, Obama is cherished, drawing a cult-like following, and Hillary needs to be needed. At the moment, in fact, she's really needy.

Obama continues to cut into Hillary's core of women voters, and perceptions of "gender" continue to be a problem for her. She's hurt because Barack Obama has the flash and filigree of a movie star, and Hillary is the wonky gal with the brains. If Barack and Hillary were Sonny and Cher, he'd be Cher.

Martha Burk, chairwoman of the National Council of Women's Organizations and a Hillary loyalist, says Hillary understands that she's the workhorse and he's the show horse, and that runs against stereotypes. "She is being punished in a certain way for being competent and not jazzy," she tells the Boston Globe. "If he were female, with his credentials, age, and track record, I don't think he'd be anywhere near the presidency of the United States."

But if Hillary weren't the wife of Bill Clinton, she wouldn't be anywhere near the presidency, either. Hillary marches through crowds of women as if she were a mirror, reflecting many different images. Feminists who despised the way Bill Clinton treated her during their White House years further despised Hillary's Tammy Wynette imitation in response to his behavior with his bimbos. She wasn't the Amazon warrior then, eager to slay dragons in the boudoir. Women in New Hampshire applauded her showing her sensitive feminine side by tearing up on the trail. But a lot of other women (and men) didn't applaud, reckoning that showing such emotion plays to female stereotypes and diminishes her as a prospective commander in chief.

Women are traditionally the "caring sex," so health care reform was a natural for her, but her big-government caring was rejected, big time. She insists that she's learned from that failure. But the Clintons, for all their differences, are united in their determination to keep hidden a lot of the details of what went on in the health care consultations in the White House. Hillary claims those White House years as part of her 35 years of "experience," but there's a lot we still don't know about her training as a workhorse.

One of President Clinton's proudest achievements was the North American Free Trade Agreement (NAFTA), but Hillary joins Obama in scorning it. That leaves it to the Republican workhorse, John McCain, to argue that NAFTA created millions more jobs than it shipped south to Mexico. "The person left to carry on this part of the Clinton legacy," notes the New York Sun, "is the Republican."

Men and women react in different ways when they're confronted with a problem. Women are eager to have their problems acknowledged; men want them solved. Human relationships are complicated, of course, and sexual differences, like political differences, are rarely clear cut. But it's clear that Barack Obama and Hillary Clinton have reversed the sexual stereotypes. She's the one in the "solutions business." He craves acknowledgement for the big problem, the need for change.

With Hillary burdened with so many qualities traditionally regarded as male, her campaign tries to dampen her aggressiveness, which makes her even more vulnerable. If Barack Obama is the eventual nominee of his party, he will have demonstrated that Democrats, if not everyone else, yearn for the female qualities in their president. The conventional wisdom says most Americans vote with their gut, but many others are voting in the primaries with their hearts. For better or worse, the Democrats are sending Hillary work orders, with Valentines and love notes to Barack Obama. It might feel good, but it's risky business.