Steve Sherman
|
Posted: Jun 04, 2020 12:01 AM
Share   Tweet
The opinions expressed by columnists are their own and do not necessarily represent the views of Townhall.com. 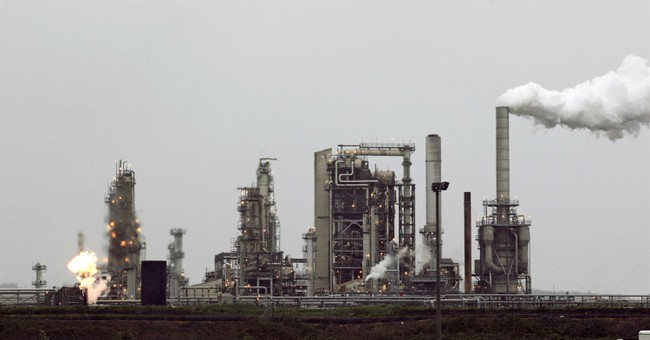 Many industries are suffering under mandates that need to be lifted to help the recovery efforts in the wake of the coronavirus economic epidemic. On April 15, 2020, Govs. Greg Abott of Texas, John Bel Edwards of Louisiana, Gary Herbert of Utah, Mark Gordon of Wyoming, and Kevin Stitt of Oklahoma sent a letter to Environmental Protection Agency (EPA) Administrator Andrew Wheeler to request some regulatory relief from disruptions in the oil market caused by the government shutdowns and other economic impacts of the coronavirus.

The governors made a compelling case for the Trump Administration to suspend a mandate that will crush the domestic oil refineries if allowed to stand. In the letter, the governors cited the law that allows a “waiver of the renewable volume obligation (RVO) under the federal Renewable Fuel Standard (RFS)” because of “severe economic hardship.” This is clearly a time of severe economic hardship with tens of millions of unemployed Americans and faced with a potential economic recession currently and going forward.

The governors are correct to demand the government take a hard look at the economic distress of American refineries and figuring out how the impact of “costs associated with the recent tripling in the price of renewable identification numbers (RINs)” will destroy domestic refiners. It clearly will, which is why these governors are trying to protect refineries and jobs from an unnecessary government mandate. The EPA needs to immediately grant this waiver to allow the domestic oil industry to get back on its feet.

The EPA should have been granting waivers even before this crisis but there is no reason why the Trump Administration should not follow the March 13, 2020, declaration of a national emergency with targeted waivers. Under the law, the EPA is designated the power to set the levels of biofuels for the next few years while factoring in likely fuel consumption to calculate a percentage of ethanol that each gallon of gas must be added by refineries. Mario Loyola, Sr. Fellow at the Competitive Enterprise Institute, explained the next steps in The Atlantic on November 23, 2019, “to create a credit-trading scheme, each new gallon of pure renewable biofuel is assigned a unique renewable identification number. That ‘RIN’ becomes a tradable credit when that gallon of biofuel is blended with enough regular gasoline to meet the RFS.” A waiver will help small refineries suffering today.

Although it is true that refiners will need to purchase a smaller number of RINs because of lower demand, the mandated renewable volume obligation was an unachievable 11.56 percent before the crisis. With the crisis, the cost of compliance is even more difficult. These mandates take cash from refiners who don’t have cash for operations, because of the crash in demand with Americans traveling far less. Derrick Morgan, senior vice president of the American Fuel and Petrochemical Manufacturers (AFPM) told Bloomberg, “we’re just looking for compliance costs to get back in line, during this time of severe economic harm to the refining industry.” Refineries are bleeding cash the mandate puts some small refiners in danger of going bankrupt.

The supporters of biofuels admit that ethanol will continue to be 10 percent of the supply of gas. A waiver will grant relief from compliance costs at a time when refineries barely have enough cash flow to support operations. Forcing them to pay for RINs will crush them. Consider this cost while demand for gas is down about 50 percent while RIN costs are up over 300 percent. The same amount of ethanol will be blended regardless of the mandate.

While the refineries are subject to the free market laws of supply and demand, the biofuel producers are granted a government-mandated market. Thanks to crashing oil prices and government mandates, two North American refiners have already become a casualty of the coronavirus economic recession. If the Trump EPA does not issue a waiver, the result will be a push for higher-priced foreign biofuels, paid for by struggling refineries, to be used in the U.S. fuel supply.

Low demand has put U.S. refineries in a tough economic position. The lack of a waiver will make the problem worse and hammer small refineries struggling to stay afloat. The EPA should grant the request of the five governors for a waiver in order to prevent damage to the critical energy infrastructure of this nation while saving thousands of American jobs.