Steve Sherman
|
Posted: Jul 19, 2017 12:30 PM
Share   Tweet
The opinions expressed by columnists are their own and do not necessarily represent the views of Townhall.com. 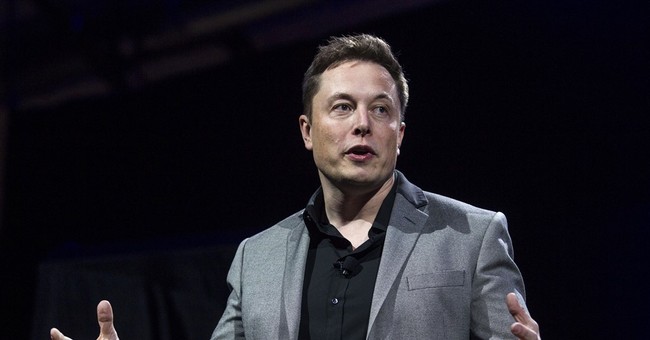 When Elon Musk was a kid, someone must have told him to “Dream big dreams” and “Shoot for the stars”, because no one can deny he does that, probably better than anyone I’ve ever seen. Even more than that, he has the uncanny ability to invite the masses to believe in his dreams no matter how outrageous they are. He can turn a horde of casual observers into sycophants with a single speech. These devotees are willing to defend their charismatic leader against all detractors, no matter how much logic and truth is brought to bear.

So, when a few SpaceX rockets blow up…it’s no big deal. It’s not even interesting to his zealots when Elon himself blames his rockets blowing up on the launch pad upon aliens! He really did that.

When Musk’s enterprises are exposed for having been financed by $4.9 billion in government subsidies with almost no genuinely marketable products to show for it, his followers only shrug. Elon Musk is the greatest snake oil salesman of all time! He has a knack for convincing people to give him billions of dollars to fund his interplanetary visions regardless of what he actually has to show for it.

The power players of Earth realize that deep space is the new world and the country that can conquer it will wield immense power. NASA and the U.S. have finally chosen to enter the arena of deep space, if for no other reason than to be able to beat Russia or China back to the Moon or Mars even. To go into deep space, it takes big rockets.

The U.S. government has partnered with private companies like SpaceX to produce smaller, low orbit rockets, but NASA has emphatically staked out the deep space territory. Former NASA Chief, Charles Bolden said, “I’m not a big fan of commercial companies building large, heavy lift rockets…We believe (NASA’s) responsibility to the nation is to take care of things that normal people cannot do, or don’t want to do, like large launch vehicles.”

A statement like that is like waving a red flag in front of a bull to a man with an ego as big as Elon Musk.

Last week, Musk and SpaceX announced they want to go against the wishes of NASA and receive public funding for deep space projects. Tim Hughes, SpaceX’s senior vice president for Global Business and Government Affairs testified before the U.S. Senate’s Subcommittee on Space, Science, and Competitiveness. He formally called on the U.S. government to support public-private partnerships in deep space.

He might as well have said, “Show me the money”!

If Elon Musk knows one thing, it’s how to get the most from the government by providing the least. He smells a big opportunity here. It will take billions to reach and sustain a presence in deep space and Mr. Musk is using his gravitas to be a part of it. Musk will never willingly allow all that money to simply flow straight to NASA. He will bring his popularity to bear. He is viewed by an adoring public as the man most likely to take us to Mars. I’m sure if a poll was taken, he would rank higher than NASA in confidence of the people.

SpaceX has officially made the “Ask”. The big question is, will Congress give him the money? Will he get yet another “Blank Check” signed by the taxpayers? With Musk’s track record it would be absurd.

Fund NASA and let them be what they were meant to be. Deep space is out there. Let them pursue it.

If SpaceX or any private space exploration companies take part in this endeavor, they must be kept on a short leash or we can expect billions more to funnel from taxpayer’s hands into the willing pockets of Mr. Musk and his cronies.

I’m sure Mr. Musk is not moving to Mars any time soon. Unless those aliens that blew up his rocket come back and kidnap him of course.