Obama’s 2014 Election Strategy: Count on the Stupid Party to Come Through Yet Again 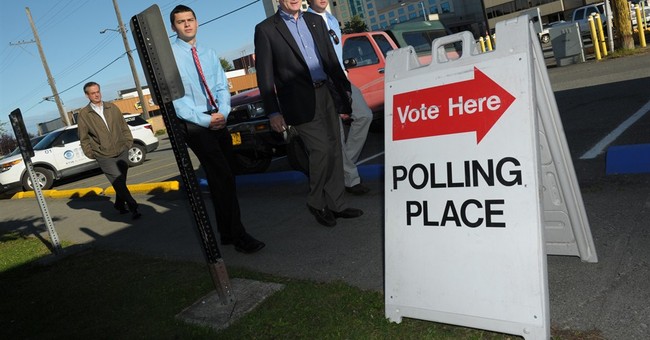 The one issue that is probably the only thing standing in the way of a GOP-controlled U.S. Senate happening this fall is now back on the table. Because whenever he needs a slump buster, Obummer knows he can always count on Republican Party “leadership” to provide—right as rain.

The Democrats cannot win this fall. This environment is exactly what we saw in 2006, but in reverse. Because of that environment, there was nothing the Republicans could do that year to win. It was just a matter of how bad the loss would be. But now the shoe is on the other foot. The president is underwater in the polls on every issue people will be thinking about when they cast their ballots come November 4th. This is exactly why Obummer hinted at playing his ultimate trump card this week.

On Wednesday, White House Press Secretary Josh Earnest revealed the Regime’s 2014 game plan when he said he hopes “Congress doesn’t shutdown the government over common sense executive action on immigration.” It would be a “real shame” he went on to say.

Allow me to translate what the Regime really means here:

“We know the leadership of the Republican Party is every bit in favor of amnesty as we are, and if it weren’t for the current border crisis they would’ve gone along with it after their contentious primary cycle was over.

Earlier this year they were even saying as much.

However, amnesty is a toxic issue to the GOP base. Since our base is demoralized, our only hope of somewhat neutralizing how many independent and swing voters we’re going to lose this fall is to similarly demoralize the GOP base in kind. When we commit our next act of lawlessness we know the GOP establishment has no stomach to try and stop – amnesty by executive fiat – conservatives will demand House GOP leadership ‘hold us accountable.’ But the only way they can do that is to file impeachment charges or defund our schemes, which will cause a government shutdown.

Either option is one these over-consulted empty suits in Speaker Boehner’s cabinet have proven time and time again they don’t have the stomach for. If they stand up to us, we’ll mobilize our sycophantic media they’re so afraid of to scare them to death. If they don’t stand up to us and buckle yet again, a demoralized GOP base could do exactly what they did in 2012, which saw millions of them staying home.

We win regardless of which outcome it is.

Throughout the course of this year I have been forecasting 2014 will be huge for Republicans, and I’m not a shill that gives pro-GOP analysis just because. I don’t get paid enough to do that. If anything, my complete lack of regard for the feckless Republican Party establishment makes my analysis more pessimistic. When it comes to snatching defeat from the jaws of victory, no one has a more proven track record. Still, I’m not even sure how the Republicans can blow this one.

Until the current and ongoing border crisis I provided that analysis with one caveat.

If the GOP betrayed its base by enacting amnesty once the scrutiny of the primaries were over that would essentially be treacherous self-immolation, but once the border crisis gripped the nation that possibility severely diminished. Now a desperate White House has brought it back up, because it knows the only people left on planet Earth who still fear this president all happen to be running the Republican Party at the moment. Not to mention a GOP leadership bought and sold by pro-amnesty K Street may desire for Obummer to enact open borders this way, believing it lets them off the hook and all the blood is therefore on the Regime’s hands.

This is what it’s like to be led by people who hate you. We can’t even trust them to stand up to what amounts to a voter registration drive on behalf of their opponents, setting aside the fact it’s also an act of Constitutional malfeasance. Obummer knows this, and he knows the GOP fights conservatives first and harder then it ever fights him.

It appears the Democrats’ entire 2014 election strategy is now banking on it.