Is the Banana Slipping Away? 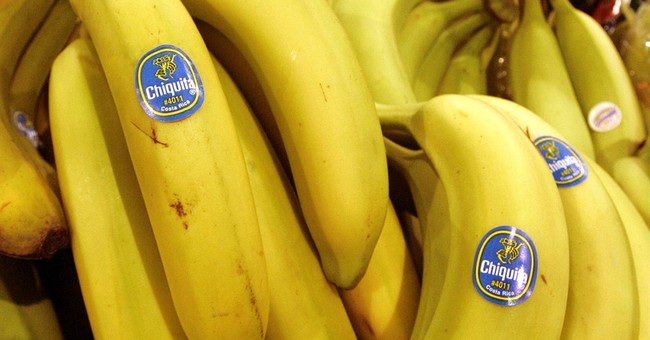 Trending
Some people lie awake nights worrying about terrorist attacks, giant asteroids crashing into the Earth or war with Russia. I can slumber peacefully through those perils. What causes me to wake up screaming is the banana blight.

To say I'm favorably inclined toward bananas is like saying Miley Cyrus has overcome her inhibitions. I have an unbroken record of eating two bananas a day that stretches back to the Johnson administration.

Two is the bare minimum I regard as necessary to sustain life. I'm not ashamed to say there are days when I've gone through five. After that I stop keeping track, on the belief that it would be unseemly, like Bill Gates counting his money.

My wife doubts that I evolved from monkeys, not because she questions Darwin's theory but because she sees no evidence I've transcended the monkey stage. If you encounter me and wonder, "Is that a banana in your pocket, or are you just happy to see me?" it's probably a banana in my pocket.

One of my proudest moments as a father was when, in the Pinewood Derby, my daughter entered a car made to look exactly like a banana. Never mind who gave her the idea.

I voted for Massachusetts Sen. Paul Tsongas when he ran for president in 1992, because I was with him when he was campaigning in New Hampshire and commended a young man who was eating a banana: "Bananas have a lot of potassium." You have to admire a politician willing to stand up to the powerful New England cranberry interests.

But he may have surmised that you can't go wrong extolling the banana. Chiquita says it's the world's most popular fruit, with the average American consuming 27 pounds' worth every year. No wonder: It's a model of perfection, with a sleek shape, a happy color, a mildly sweet flavor, many nutrients and a protective skin that signals when texture and taste are at their peak.

I don't know what I'll die of. But it won't be potassium deficiency. I could probably sign up to be a potassium donor.

You laugh, but that role could be important given the dread developments in the banana fields. "The Cavendish banana -- the vitamin-packed yellow beauty found in most of the Western world -- could be going the way of the dodo," reported MSN News last year.

This variety, which accounts for 95 percent of the bananas sold in the United States and Europe, is under siege by a disease that wiped out what was once the most popular banana, the Gros Michel, in the 1950s. On top of that, the Cavendish faces another virulent disease, plus a devastating fungus that has become resistant to fungicides.

As yet, these enemies have not gained a foothold in Central and South America, the blessed source of most of the bananas we eat. But plant pathologist Gert Kema of Wageningen University in the Netherlands told The Economist magazine that "it's not a question of whether it will occur there. It's a question of when."

We're at that stage of the horror movie when the teenagers in the remote house are partying, unaware of the killer ascending the basement stairs. You may want to cover your eyes.

Scientists are trying to find a version that is not only immune to these scourges, but durable and tasty like the Cavendish. Surely that can't be hard, since there are some 1,000 kinds cultivated around the globe.

Right -- and if the Taj Mahal collapses, India has other sights to see. "Consumers might turn their noses up at pungent varieties," notes The Economist. "Thin-skinned ones would not survive weeks in a ship's hold."

Some kinds have a tart flavor, some have a dry texture and some turn black when ripe. Anything different from perfection is imperfect.

Shaken by the possibilities, I contacted Wal-Mart, which is the world's biggest retailer and which sells more bananas than any other product, to find out whether it has a contingency plan for a banana famine. I was informed that the company has nothing to say on the topic.

Red alert: If this gigantic purveyor refuses to disclose how it will satisfy consumer demand for its most popular item, maybe it actually won't. And maybe no one else will either.

So the bananas we all know and love could someday vanish from stores. If you want to eat the last one, go right ahead. Right after you pry it from my cold, dead hands.