Irrationality in Football and Politics 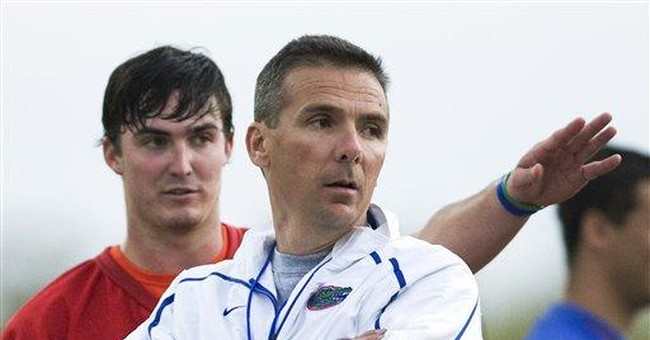 Shortly after he was elected in 2008, Barack Obama expressed dissatisfaction at the way major college football determines a national champion -- in an antiquated, jerry-built process instead of a simple, fair one.

I have to say, Obama makes me wonder why we have to endure a strange and irrational system that causes so many participants to feel shortchanged. I mean, this is no way to choose a president.

Oh, you thought I was talking about college football? Hmm. Now that you mention it, the same critique applies. Both the Bowl Championship Series and the Electoral College are bizarre creatures that survive despite defying logic and justice.

The BCS stands for the proposition that winning isn't everything. At the end of the 2008 regular season, Utah was undefeated. The title game featured two teams that were not. Texas Christian had a perfect season this year. Yet the Horned Frogs will be at the BCS championship game Monday evening only if they buy tickets.

Likewise, the Electoral College exists to say that democracy is really overrated. In 2000, Americans went to the polls, and a plurality voted for Al Gore. But George W. Bush, with half a million fewer votes, moved into the White House.

That event focused attention on the Electoral College while blinding some people to the shortcomings of the system. Those people are called Republicans. What they forget is that Bush feared he'd be the one to win a majority of the popular vote and lose the presidency.

In that case, the New York Daily News reported a few days before the election, his team planned an all-out effort to pressure electors to vote for the winner of the popular vote, even if they were supposed to vote for the guy who won their state.

The Bush staffers were counting on the sense that it's unjust for the majority of voters to be denied their choice -- something that had not happened since 1888 and that most Americans were not prepared for.

The GOP showed again in last November's elections that it has no trouble winning simple majority-rule contests. And however you feel about Bush and Gore, the presidential scheme is unfair and undemocratic.

The only reason that fact is not more widely recognized is that the popular vote and the electoral vote usually go to the same candidate. If they frequently diverged, both parties might rise up.

No one, starting from scratch, would create either the BCS or the Electoral College today. But encrusted with tradition and history and protected by massive inertia, they persist in spite of their gross defects.

BCS defenders say it preserves the glorious bowl tradition and makes regular season games more meaningful. True enough. And yet this alleged specimen of genius is unsuitable for every other sport in the NCAA.

If you want to win the national championship in baseball or volleyball (or football in the other divisions), you do it by winning a playoff. If the BCS approach is so great, why doesn't anyone else use it?

As for the Electoral College: ditto. We all remember the post-election court fight in 2000. But as Texas A&M University political scientist George C. Edwards III wrote in his 2004 book, "Why the Electoral College Is Bad for America," "If we selected presidents like we select governors, senators, representatives, and virtually every elected official in the United States, Al Gore would have been elected president -- no matter which chads were counted in Florida."

The existing system is supposedly vital because it preserves federalism, strengthens the two parties and promotes national consensus. Really? Has anyone noticed that the states have steadily lost power? The two parties have no trouble dominating non-presidential elections.

Far from fostering broad consensus, it forces candidates to concentrate on a narrow slice of the country. California and Texas are the two most populous states, but neither got a single visit from a presidential or vice presidential candidate during the fall 2008 election campaign. What kind of "consensus" leaves out 60 million people?

Both the BCS and the Electoral College have their staunch defenders (including, in past years, me). But the virtues ascribed to each amount to lame rationalizations for a mess we can't seem to escape. We are hostages, and some of us have succumbed to Stockholm syndrome, coming to identify with our captors.

We may have to live with these ridiculous, outmoded methods. But we don't have to kid ourselves.