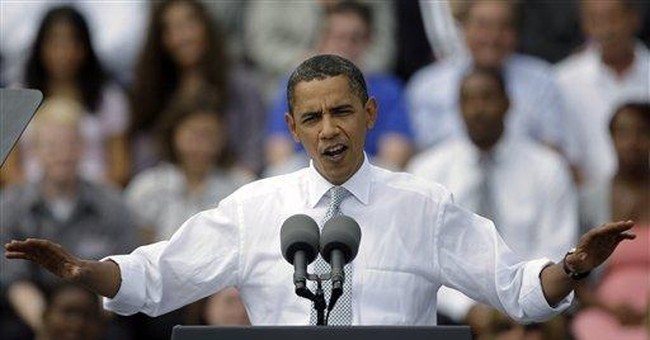 Barack Obama came into office championing change, and he apparently assumed that if Americans voted for him, it was because they wanted the future to be different from what went before. Actually, what they wanted was a future much like the not-so-distant past -- before the financial crisis, before the recession, before the Iraq war, before the most unpopular president since the invention of polling.

If voters had wanted a sharp ideological shift, they could have voted for Democratic candidates more identified with Great Society-style government -- Hillary Clinton, John Edwards or even Dennis Kucinich. Obama got the early endorsement of Ted Kennedy, but like Bill Clinton before him, he won because he distanced himself from Kennedy-style liberalism. His promise of change was eloquent enough to motivate the left wing of his party but vague enough to make him acceptable to people in the middle.

Among independents, Obama beat John McCain by an 8-point margin. The reason John Kerry lost and Obama won, as Democratic pollster Douglas Schoen has noted, was not liberal voters: They voted for both in the same proportion. The difference was that while Kerry had a 9-point edge over his Republican opponent among moderates, Obama carried them by 21 points. Obama also did significantly better among conservatives than Kerry.

After the election, then-chairman of the Republican National Committee Mike Duncan noted that the Democratic nominee supported offshore oil drilling, merit pay for teachers, a tax cut for 95 percent of Americans, more troops in Afghanistan and an end to wasteful federal earmarks. "Put simply," he said, "Barack Obama just ran the most successful moderate Republican presidential campaign since Dwight Eisenhower."

In the weeks after the election, amid talk of a second Great Depression, Obama was often compared to Franklin D. Roosevelt. But by the time FDR took office, the economy had been in free fall for more than three years, creating mass desperation.

The recession that began in December 2007, though scary, never remotely resembled the Great Depression. During last year's campaign, the situation was more like 1952 than 1932, with the electorate sick of war and tired of a party that had dominated the presidency for too long. When Americans elected Eisenhower, they weren't inviting a radical turnabout -- just some modest improvements in the status quo. Likewise with Obama.

But the 44th president apparently thought he had a mandate for the expansion of federal power and responsibility, which he has used on everything from bailing out automakers to showering the economy with stimulus dollars to trying to overhaul health insurance. He and his allies have therefore been surprised to face a surge of angry opposition, including some based on wild flights of paranoia.

What they forgot is that the surest way to mobilize American political opposition, irrational as well as rational, is to enlarge the government's role in our lives. Liberals and conservatives disagree on when to distrust the government, but they share the same basic suspicion.

George W. Bush managed to infuriate the Left in the wake of the 9/11 attacks by pushing through the Patriot Act, engaging in warrantless eavesdropping on Americans and commandeering library records. Obama managed to provoke the Right by spending hundreds of billions of dollars and proposing that the government exert more control over medical care.

That conflicts with our persistent strain of anti-government feeling. Obama's election marked no sudden ebbing of this sentiment: Last December, 52 percent of Americans felt the government was "doing too much that should be left to individuals and business" -- up from 41 percent in October 2001.

In 1998, 61 percent of Americans said they had confidence in the federal government's ability to handle domestic problems. On the eve of the 2008 election, only 48 percent felt that way.

Even amid the worst recession in decades, most have not changed their minds. Today, more than half say the president's policies go too far in expanding the federal government, and his popularity has declined as a result.

One symbol used by the colonies in their revolt against the king of England was a coiled rattlesnake above the slogan: "Don't tread on me." Obama may be learning that, even for elected leaders, it's still good advice.