Back to the Future on Cuba 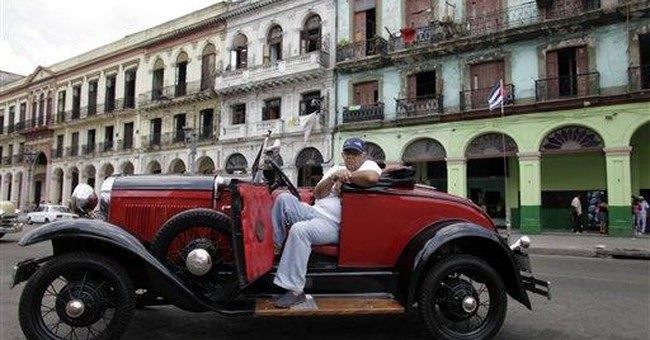 In 1960, a gallon of gas cost 31 cents, Princeton University undergraduates were all male, the Braves played in Milwaukee, and Fidel Castro's Cuba was under a U.S. trade embargo. Today, gas costs more than $2 a gallon, Princeton has a female president as well as female students, the Braves make their home in Atlanta, and Fidel Castro's Cuba is … under a U.S. trade embargo.

Cuba, once a bustling tropic isle, is now a museum housing ancient relics -- the two most prominent being a dictatorship that insists communism has a future and an American policy that pretends economic isolation can cause that government's demise. Barack Obama was supposed to bring the forces of change to Washington. But his newly announced Cuba policy is mostly more of the same.

Charles Dickens' novel "Bleak House" concerns a court case that is notable only for its matchless longevity. "Innumerable children have been born into the cause; innumerable young people have married into it; innumerable old people have died out of it," wrote the author. "The little plaintiff or defendant who was promised a new rocking-horse when Jarndyce and Jarndyce should be settled has grown up, possessed himself of a real horse, and trotted away into the other world. … (B)ut Jarndyce and Jarndyce still drags its dreary length before the court, perennially hopeless."

At this point, it has no great impact, because we're the only ones observing it. Cuba can buy from, sell to and welcome just about anyone in the world except Americans. To suggest that U.S. sanctions are capable of isolating the island nation brings to mind the headline that once appeared in a British newspaper: "Fog Over Channel. Continent cut off."

Even Francisco Hernandez, head of the anti-Castro Cuban American National Foundation, which supports this economic punishment, conceded to The New York Times that the policy is merely "symbolic" and "not something that is that important anymore."

But the repeal of a largely symbolic policy is more than Obama is ready to contemplate. The administration portrays his new approach as a "major" shift. The Washington Post said he is "breaking from policies first imposed by the Kennedy administration." As if. He's doing little more than dropping a few extra restrictions imposed by George W. Bush, leaving the basic embargo encased in rock, like the fossil it is.

His most notable alteration is segregating our Cuba policy by national origin. Under Obama's plan, Americans who have relatives in Cuba will be able to travel there as often and as long as they want, as well as send all the money their cousins can spend. But Americans without family ties to the island remain under lockdown. The embargo is supposed to advance freedom in Cuba by denying freedom in the United States.

What is the logic here? If an influx of Cuban-Americans would weaken Castro's regime by exposing its people to our ideas and way of life, then an even larger influx of other Americans would do the same thing, only more so. If blocking travel and remittances by most Americans is supposed to topple the government, blocking travel and remittances by Cuban-Americans ought to accelerate the process.

But there is nothing to accelerate. Sanctions haven't worked, are not working and will not work -- as 49 years of experience ought to have convinced us. Fidel Castro has outlasted 10 U.S. presidents, and with brother Raul now running things, his dismal but durable autocracy promises to survive indefinitely. Instead of weakening the regime, our policy may strengthen it by furnishing a perennial excuse for its dysfunctional economy.

Despite that, Obama is merely tweaking the policy he inherited. In most places, people who try things that clearly don't work eventually stop doing them. But in Washington, nothing succeeds like failure.