Stephen Strang
|
Posted: Dec 21, 2019 12:01 AM
Share   Tweet
The opinions expressed by columnists are their own and do not necessarily represent the views of Townhall.com. 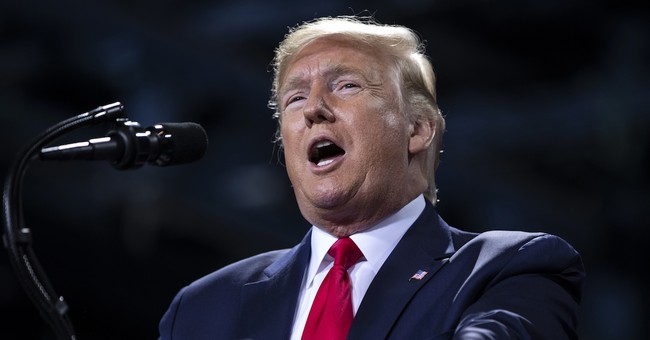 Editor's Note: This is Part I of a two-part series.

Long before this week’s impeachment hearings, tens of thousands were filling arenas nearly every time President Donald Trump visited a city. And I was among them. When he chose to announce his bid for reelection in my hometown of Orlando on June 18, 2019, I was there, and I write about the rally in my new book, “God, Trump, and the 2020 Election.”

That evening, the president delivered a 76-minute trademark speech, telling all the things he’s accomplished in his first term. No matter what else you can criticize the president for, he keeps his word. At his huge rallies he likes to say, “Promises made, promises kept.” The list of what he has accomplished is stunning, even if often ignored.

Trump hit the ground running in January 2017. Early into his term he began achieving results domestically and internationally for the American people. Since taking office, he has strengthened American leadership, security, prosperity, and accountability. While critics are quick to blast Trump’s perceived mistakes and flaws, the president has one character trait that many other politicians lack: he keeps his promises. Just look at our now-booming economy, muscular diplomacy and new embassy in Jerusalem. Even his support of religious liberty is in response to a promise he made to a roomful of pastors during his campaign.

I believe President Trump has made a huge difference in his first term. But despite all the progress there are other issues he must focus on. One is the nation’s overwhelming debt, which Trump has not been able to bring down yet. Part of the reason for that is the tremendous deficit he inherited from past presidents, while the other part is that he simply hasn’t focused on it thus far.

Meanwhile the American economy is stronger, American workers are experiencing more opportunities, confidence is soaring, and business is booming. President Trump has reasserted American leadership on the world stage, secured vital investments in our military, and stood up against threats to our national security, all while putting the American people first and making government more accountable.

President Trump trumpets his accomplishments in his many speeches. One place where the nation was closely watching was in his 2019 State of the Union Address where, along with enumerating his accomplishments, he supported biblical values and the sanctity of life.

“There could be no greater contrast to the beautiful image of a mother holding her infant child than the chilling displays our nation saw in recent days,” Trump had said. “Lawmakers in New York cheered with delight upon the passage of legislation that would allow a baby to be ripped from the mother’s womb moments from birth. These are living, feeling, beautiful babies who will never get the chance to share their love and their dreams with the world.”

Of course, Trump didn’t address only the horrors of abortion. He called on Congress to protect America’s workers, to end the human sex trafficking spread through illegal immigration, and to protect our freedom by rejecting the seductive evils of socialism. He once more reiterated his determination to build a wall on our southern border. But above all he called the country to unity—to work hard toward the common goal of growth and safety.

Instead of spouting conservative promises with no intention of keeping them—as many Republican candidates do nowadays—Trump has been true to his word. I think part of the reason Trump has been such a change agent for America is the fact that he doesn’t play according to the rules of politics. He refuses to muck around in the deep state. On the contrary, he seems as though he truly wants to make America great again. And for that, Americans can be grateful. Here are just a few of the many promises Trump has kept:

Trump Promised to Put Conservative Judges on the Bench

Trump has worked hard to place conservatives on the Supreme Court. Despite opposition, he keeps pressing forward with his agenda for the nation. To me and many other conservative Christians the single reason they voted for Trump is that he promised to appoint conservative judges to the bench.

Trump promised during the campaign that he would cut regulations. One of the first things he did was require that for every new governmental regulation passed, two existing regulations must be repealed. That sounded like a pretty good ratio to me to bring less government. But the record so far is that for every significant new regulation the bureaucracy writes, they repeal four significant regulations! That’s extraordinarily good news, but you don’t hear much about it. The entire economy has benefited from less regulation.

In fact, one reduction in regulations indirectly benefits the spread of the gospel. How? A certain out-of-date FCC regulation has been lifted, so there’s more money left for Christian broadcasters to pursue their mission.

One of the biggest promises kept for evangelicals was when Trump moved the U.S. embassy to Jerusalem, declaring it Israel’s capital and opening the embassy on the 70th anniversary in 2018 of the founding of the State of Israel. The proclamation brought joy to many evangelicals.

Trump Promised to Free the Economy to Boom

No matter how hard the liberal media may try to refocus the world’s attention on other issues, the good news coming from President Trump’s booming economy is impossible to ignore.

Two years into Trump’s term as president, the independent newspaper Epoch Times published 70 ways President Trump changed the nation, including this glowing account of the U.S. economy: “From sweeping tax reform to support for energy production, President Donald Trump’s pro-business policies have boosted the job market,set records in the stock market, and helped individuals and companies to thrive.”

Since there are more successes where these came from, stay tuned for Part Two!

(Stephen E. Strang is an award-winning journalist, founder and author of the best-seller “God and Donald Trump.” This content was excerpted from his new book, “God, Trump, and the 2020 Election,” out Jan. 14.)