Stephen Moore
|
Posted: Feb 14, 2017 12:01 AM
Share   Tweet
The opinions expressed by columnists are their own and do not necessarily represent the views of Townhall.com. 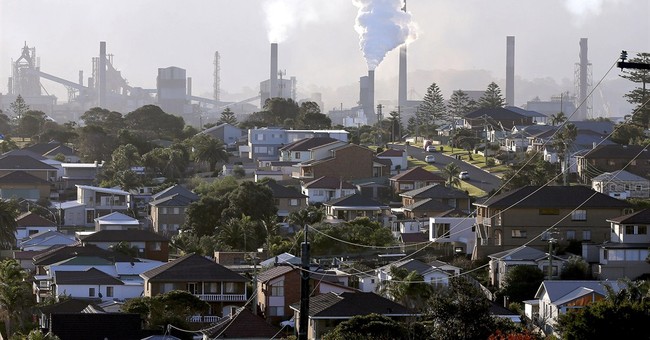 I have nothing but respect for former Secretaries of State Jim Baker and George Shultz, but come on, gentlemen: You've been snookered.

These two esteemed gentlemen are endorsing a tax scam that would be one of the largest income-redistribution schemes in modern times. It would do considerable and lasting damage to the U.S. The justification for the tax is that it will save the planet by reducing greenhouse-gas emissions, but it won't even do that.

The Baker-Shultz plan would impose on America a carbon tax, which would be a tax on American energy consumption. Since energy is a central component of everything that America produces, it would make the cost and thus the price of everything -- and I mean everything -- produced in America more expensive. It is a tax that only China, India, Mexico and Russia could love.

The tax is highly regressive, so the remedy that the two call for is a quarterly check from the Social Security Administration for every American. They call this a dividend. Somehow they have come to the conclusion that two really bad ideas paired together make for a good idea.

So let's get this straight: We are going to tax the producers of the economy and then give the money to people who don't produce, and somehow this isn't going to negatively affect the economy. If that makes sense, then why not adopt a 100 percent tax on production and then redistribute the money to everyone?

My colleague Katie Tubb at the Heritage Foundation has noted another glaring flaw with the carbon tax. While it is true that a carbon tax is a much more efficient way to cap carbon-dioxide emissions than the mishmash of EPA regulations, renewable energy standards and subsidies for wind and solar power, there's a strong likelihood that the carbon tax would end up not being a replacement for these economically destructive policies. Instead, it would simply be another addition to the regulations. It is naive in the extreme to think otherwise.

But the green plan proposed by these former Reagan statesmen would not cut a single tax rate, meanwhile giving the left a massive new tax regime. How could any conservative support this plan?

Even worse is that the Baker-Shultz plan does close to nothing to reduce greenhouse-gas emissions or to lessen the threat -- if one exists -- of global warming. Whether or not the U.S. reduces its carbon emissions has close to zero impact on worldwide carbon-dioxide emissions. This is because China and India are building coal-burning energy plants at a frantic pace. The Wall Street Journal reported in November that new coal production in China in the next few years will create more carbon dioxide emissions than the entire energy production of Canada. India isn't far behind.

So it is a fairy tale that China and India and other fast-developing nations have any commitment to reducing their fossil fuel use. As Donald Trump would say, they are laughing at America behind our backs. They would be absolutely gleeful about the proposed U.S. carbon tax. Raising the cost of production for U.S. goods and services will transfer more production to China and India. We will get relatively poorer, and they will get relatively richer.

And if you are a global-warming worrier: This carbon-tax would drive global greenhouse-gas levels up, not down. We have clean-coal regulations. None of the developing nations do. The less America produces, the worse off the planet is.

The best way to reduce global greenhouse gases is for the U.S. to produce more of our domestic energy, not less. We have very cheap and abundant natural gas (thanks to fracking), and we should export it all over the world. The U.S. has reduced carbon emissions more than any other nation not because of regulations or green-energy subsidies but because of shale gas. Let's sell it to every corner of the globe, get rich and save the planet.

The Baker-Shultz plan will do nothing to save the planet, but it will surely make America poorer.