Government Spontaneously, Dramatically Changing the Rules Is Terrible for Business

Seton Motley
|
Posted: May 10, 2016 11:25 AM
Share   Tweet
The opinions expressed by columnists are their own and do not necessarily represent the views of Townhall.com. 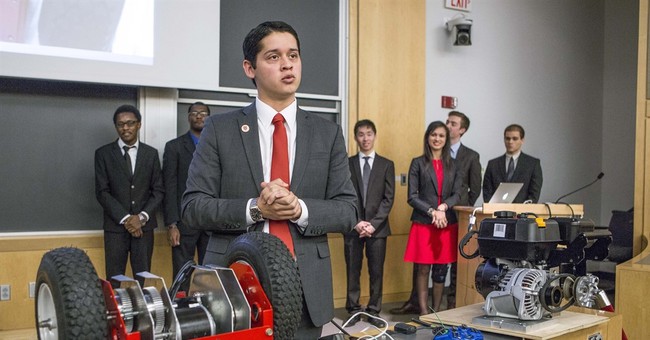 Merriam-Webster Dictionary defines “Certainty” as: “The quality or state of being certain especially on the basis of evidence.” As we know, evidence abounds that the world is inherently a very uncertain place.

Given all the naturally-occurring uncertainty that exists, the last thing we need is unnecessary, artificial uncertainty thrown on to the pile. Unfortunately, that is what our government incessantly insists on doing, which is a violation of its mission statement. Ensuring certainty is one of the main reasons our Founding Fathers set up our government the way they did. Laws are written by the Legislative Branch - by representatives elected by and directly accountable to us. And are, by design, systemically difficult to pass (the Senate as “cooling saucer”).

The Executive and Judicial Branches are only to execute and adjudicate laws written by the Legislative - they are not themselves to create law because Executive Branch bureaucrats are elected by - and thus accountable to - no one. And judges receive lifetime appointments - and are thus accountable only to the Grim Reaper. If bureaucrats or judges start writing law - it is unilateral tyranny, antithetical to our constitutional system.

If you own a business, or work for a business, or conduct business with business…if you in any way do any business - government-created uncertainty is likely the main bane of your existence. It is hard enough to get a business up and running and off the ground - let alone to then have it take flight. Government parachuting in to yank their rugs out from under you is, quite simply, devastating.

To wit: “In Immersion Corp. v. HTC Corp.,…a rogue trial court opinion broke from established Patent Office practice to deny priority where the ‘daughter’ application was filed on the exact date of the ‘parent’ patent grant.”

One need not get into the legal weeds here. Here we have a single “rogue” judge (that would be Delaware U.S. District Judge Richard Andrews) that “broke from established Patent Office practice,” which is the quintessential definition of government-created, artificial, unnecessary uncertainty.

Should His Rouge-ness’ unilateral fiat stand - the damage that will be done is enormous: “The U.S. Patent and Trademark Office says some 13,000 patents will be at risk of invalidity if its rule is upended. ‘That will surely come as a shock to the many inventors that relied on the PTO rules, the agency said.…”

That’s huge uncertainty - causing huge private sector harm and all the result of one unelected government official doing not his job - but someone else’s.

What the Patent Office said is vitally important. Inventors - and their investors - rely on these rules. They make multi-billion dollar decisions based on that certainty. And now one rogue judge has eviscerated it.

For those of us who like new things - and the trillions-dollar economy based upon them - that’s really bad news. If people can’t protect what they invent or that in which they invest they will stop inventing and investing.

And there goes everyone’s everything.

Unfortunately, far too often the right branch of government does the wrong thing too. Congress is certainly capable of creating uncertainty where none need exist with badly devised and crafted legislation. To wit:

‘Innovation Act’ Will Stifle Innovation: “For investors in technology start-ups, things are about to get much more complex and dangerous….(T)his bill actually will kill investment and innovation ... The American patent, so indispensable to technology start-ups, is about to be rendered useless when faced with an infringer of disproportionate size ... "

The Innovation Act Would Hurt Inventors Like Me, And Thousands Of Others: “(T)he Innovation Act threatens American inventors, particularly individual inventors and those working at small businesses and startups ...”

“Complex and dangerous” - certainly sounds uncertain to me.

More importantly, it sounds uncertain to inventors and investors - whom we all need to be inventing and investing.

So  on the Innovation Act, Congress should do absolutely nothing. Let it lie and die - without a vote or any further consideration.

As is just about always the case, government doing nothing is the best and most certain thing it can do.