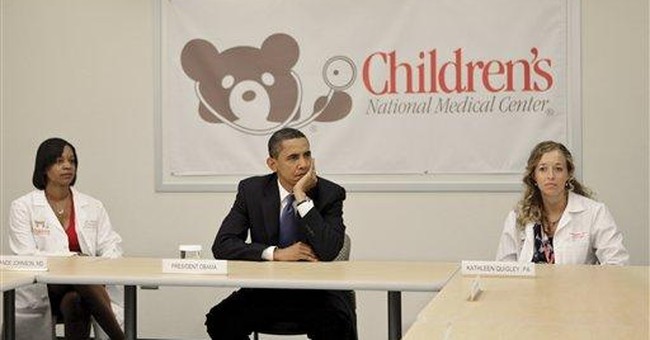 Any health care plan will have winners and losers. That is a fact. Under the Obama plan healthcare will be distributed more evenly, which sounds nice in theory, however in reality this means that some Americans will see their current level of health care decrease. The only way to provide care to more people with the same or less money is to pick losers.

During Obama’s staged town meeting on health care, a woman with cancer and no healthcare coverage asked a prewritten question and received a staged hug after Obama told her that he would help her. Unsurprisingly it turned out she was an Obama campaign worker. The snake oil salesmen of the nineteenth century used to seed their audiences with shills to talk up the cure too.

This deceptive practice was an un-clever attempt to imply that under Obama’s plan the insurance-less woman would have her cancer cured. Republicans should counter with their own town hall healthcare forum whereby they can invite real people who would be victims of health care rationing and not allotted treatment. Republicans could make a public appeal and ask Obama why these people do not get access just because the government underwriters callously determine that saving their lives will cost too much.

Grace-Marie Turner of the Galen Institute recently wrote an analysis of the “six worst flaws” of the Obama healthcare plan. Among them, “A uniform, government-defined benefits package. Rather than letting individuals pick plans based on their own needs, the Obama proposal would require insurers to offer a minimum benefits package. Congress will soon see every special interest group — from alcohol-abuse counselors to chiropractors and acupuncturists — lining up on Capitol Hill lobbying to have its service included in the ‘minimum’ package.” Do not be fooled- the rationing of care will be the bedrock of the government plan.

Just look at Medicare for example, the government, not doctors, determine what the cost value is for a particular procedure, Diagnostic Related Groupings as they are called, and the government dictates the treatment protocols and how much the doctor can charge for any procedure and how long a patient is allowed to stay in the hospital for each procedure. This should make everyone question the danger of government intervention.

In June, the New York Times reported that a Times/CBS poll determined that “most Americans would be willing to pay higher taxes so everyone could have health insurance and that they said the government could do a better job of holding down health-care costs than the private sector.” The poll question I would like to ask is; how many of those polled actually pay taxes? It is easy to say you are in favor of higher taxes for more benefits when you are not the one paying the higher taxes.

The reality is this: there will always be some people who receive less care than others under any healthcare system; under the free market it is those who take from the system who get less care than those who pay for the system; under Obama’s plan the government sets standards that determine who gets care. This is especially alarming considering the way Obama has used the power of government to allocate resources to reward his supporters and punish those who supported his opposition. No one should be comfortable with a system that gives the power of life and death to a politically appointed bureaucrat especially with easy access through public documents to information on whom the patient supported.

The Obama Administration and the Democrat controlled Congress will do their best to ram this legislation through before the American people have a chance understand its devastating ramifications. They know the more we analyze this proposal the more their poll numbers will drop. On July 21, the Wall Street Journal opined “The more we inspect the House bill, the more it looks to be one of the worst pieces of legislation ever introduced in Congress.” Sadly, few members of congress will inspect the bill at all before voting for it.