Scott Rasmussen
|
Posted: Apr 13, 2017 12:01 AM
Share   Tweet
The opinions expressed by columnists are their own and do not necessarily represent the views of Townhall.com. 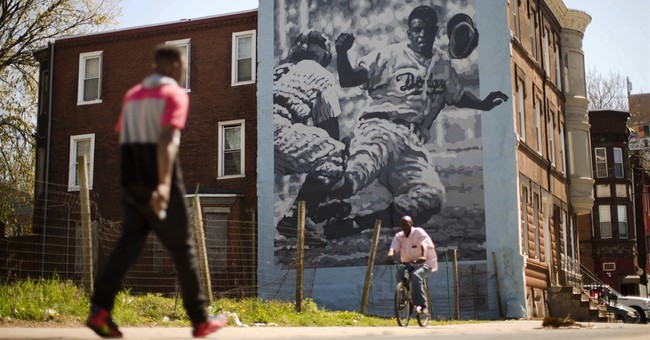 Trending
Seventy years ago this Saturday, Jackie Robinson made history by breaking the Major League color barrier. MVP awards, All-Star selections and championships recognized his skills as a player. His very presence dramatically changed the world of baseball. Within a few months, other teams began adding black ballplayers. Over the following 12 seasons, eight of the National League MVP awards were won by black men.

Facing enormous hostility from fans and other teams, Robinson and his wife consistently demonstrated the power of nonviolent resistance years before the world ever heard of Martin Luther King Jr.

Major League Baseball appropriately honored his larger legacy by retiring his number so that nobody else on any team will ever wear number 42 again. The sole exception is on April 15 each year, Jackie Robinson Day. On that day, every player, coach, and manager on every team wears number 42 in celebration of Robinsons' life. No other player has ever received such an honor.

It's important to recognize that the courage and class Robinson displayed in the face of hatred and vicious personal attacks changed far more than baseball. When he first took the field for the Brooklyn Dodgers in the spring of 1947, his presence sent shockwaves throughout all of society and forced others to adapt. It generated untold millions of conversations among baseball fans who carried those discussions into other areas of life.

PBS later noted that it "was a major blow to segregation everywhere." It wasn't until one year after Jackie Robinson joined the Dodgers that President Harry Truman integrated the U.S. military. As always, the culture leads and politicians lag behind.

Dealing with Robinson as a member of the Dodgers led to the integration of many hotels and restaurants where the team stayed. Other organizations changed as well. The Sporting News, a paper that opposed integration of baseball, ended up naming Robinson its Rookie of the Year in 1947.

Four years earlier, in 1943, Parks had been ejected from a segregated bus in Montgomery because she refused to give up her seat to a white man. At the time, the event attracted little notice. But, nearly nine years after Robinson's first Major League at-bat, things had changed. When the heroic Parks again refused to give up her seat, she sparked the Montgomery bus boycott, leading to the emergence of Martin Luther King Jr. as a leader who applied the lessons of nonviolent resistance on an even broader scale.

Acknowledging the debt his movement owed to the ballplayer, King called Robinson "a pilgrim that walked in the lonesome byways toward the high road of Freedom. He was a sit-inner before sit-ins, a freedom rider before freedom rides." Robinson, of course, was not the sole reason for the cultural changes that took place. But it is almost impossible to overestimate the significance of his contributions.

Jackie Robinson's story, like so many other American stories, highlights the reality that the culture leads and politicians lag behind. It took 17 years before Congress caught up to the Brooklyn Dodgers and passed major civil rights legislation. In fact, by the time Congress got around to acting, the Dodgers weren't even in Brooklyn anymore.