Ryan Bomberger
|
Posted: Aug 02, 2019 12:01 AM
Share   Tweet
The opinions expressed by columnists are their own and do not necessarily represent the views of Townhall.com. 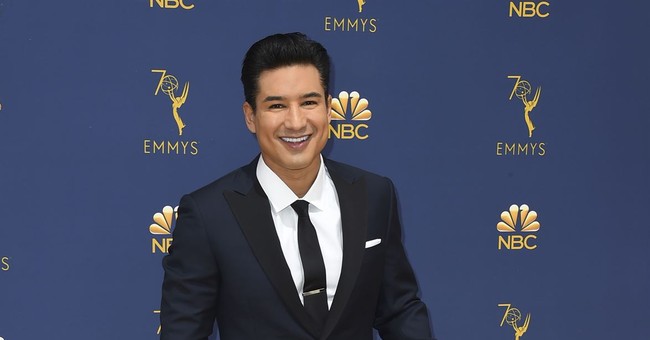 Mario, oh Mario. What did you just jump into?

You spoke common sense about children not making drastic life-altering decisions about sexuality at the age of 3. You know, because toddlers who think they’re fish, or dinosaurs, or fairies, or dogs, or any number of imaginary things are authorities on gender and sexuality. Your interview with Candace Owens was so…reasonable. But Tinseltown had no tolerance for basic truths about our humanity and parental responsibility.

So the cult of transgenderism swiftly wielded its fierceness and caused a father to cower in fear. Never mind the dangers we willingly open children up to when we push LGBTQXYZ pseudoscience. There are many well-documented reasons why medical professionals consider “gender ideology” to be extremely harmful to kids. The American College of Pediatricians, which embraces science instead of activism, lays out those reasons here.

Too many Americans—including Mario—allow themselves to be silenced while the new sexual revolution claims more and more younger victims.

Sorry, Hollywood. Parents need to guide their children’s decisions, not the other way around. If “self-identity” is reality, then I’m a movie star. I deserve to be treated like one. I want my star on the Hollywood Walk of Fame. I want access to all of the posh restaurants and A-list parties. I want to profit from gun violence in my movies while denouncing it in the real world. I want to decry #MeToo sexual exploitation while being obsessed with reckless sexual behavior in my films. I want to call everyone a racist while I work for an industry still steeped in it. I want to tell people about “emotional safety” for children as I celebrate my fifth marriage. I want to preach about “being who you really are” as I emerge, unrecognizable, from my sixth plastic surgery. No one can challenge how I “identify” because facts are hateful, and feelings are healing. Oh. And in my pursuit of temporal happiness that will inevitably spiral into irreversible regret, people need to pay for my “transition.”

The Human Rights Campaign (whose co-founder and previous president, Terrance Bean, paid an alleged victim $225,000 to settle a pedophilia lawsuit) thinks teaching children actual biological science is "dangerous to the safety and well-being of LGBTQ youth, especially trans children who deserve to be loved and accepted for who they are." I guess they mean little boys being dolled up and paraded around in a gay bar to the applause and cheers of adulating gay men? Eleven year old “Desmond Is Amazing”, a confused boy with autism, is thrust into an overly sexualized adult world and that’s “safety and well-being?” That’s being “loved and accepted?”

As parents, something should stir inside of us to see this for what it is—brokenness. While mainstream media celebrated a 11-year-old boy in drag being sexualized in a gay bar, who would be celebrating the same if it were a dad hustling his 11-year-old daughter in a “gentlemen’s club?”

When it comes to LGBT ideology, our society is losing its ever-lovin’ mind. Acts that would not be acceptable in any other context are celebrated and adorned with rainbows and sparkles.

Our culture is obsessed with sex. It always has been. And children have long been the targets of those who want no sexual boundaries. They’ve advanced in their euphemistic language of justification. You’re homophobic if you think children shouldn’t be sexualized and exposed to pornography or groped at by grown men or women. You’re hateful if you don’t think a child should be pumped with carcinogenic puberty blockers to dangerously counter what biology determined at conception. You’re a bigot if you don’t want your tax dollars going to your local library to bring in drag queens to “read” to your children and have those kids lie on top of them.

Sorry. I had to step away from the keyboard for a moment. WHAT in the actual…I don’t curse, but there’s a holy anger that wells up inside of me when I think of how we are allowing the sexual and emotional destruction of our children under the very symbol of a rainbow that was a promise, from God, to withhold destruction.

Men. Rise up. Stop being kicked to the periphery by a predatory culture that depends on your absence. Stop being bullied by an LGBT industry that wants to tell you how to be men. Stop being silent when leftist politicians and judges want to obliterate gender and celebrate confusion. Stop standing around while boys who “identify” as girls are pummeling your high school daughters in track and field. Alliance Defending Freedom is working tirelessly to protect girls and actual womanhood from being erased.

Why aren’t fathers, from coast to coast, working as hard toward this same goal?

You could’ve been super, Mario. You could’ve risen above the mindless groupthink of Hollywood. You could’ve shown your children what it means to show courage and conviction instead of capitulation. You allowed yourself to be bullied by LGBT Inc and say words you obviously don’t believe. The irony in all of this is that you weren’t allowed to be who you are. That special privilege, apparently, is only for the self-proclaimed tolerant.

Perhaps in the land of make-believe, this inverted model of parenting—where children dictate reality—works under all the make-up, lighting rigs, fake environments and scripted outcomes. But in the real world, bad parenting decisions have dangerous consequences for our children. And we don’t protect them by affirming the thousands of fleeting moments of confusion they will have in their lives. Loving our children, deeply, means we’re unafraid to speak truth even while everyone else is shouting a lie.