Ryan Bomberger
|
Posted: Aug 29, 2018 10:42 AM
Share   Tweet
The opinions expressed by columnists are their own and do not necessarily represent the views of Townhall.com. 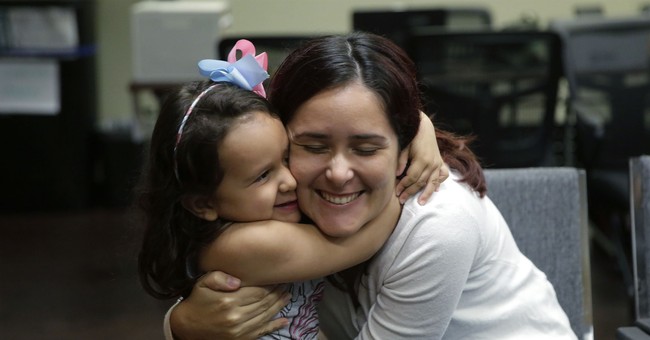 When it comes to adoption, I’m incredibly biased. Although I was conceived in rape, my birthmom chose to be stronger than her circumstances. She rejected the further violence of abortion, and gave me life and the gift of adoption. I grew up in a family of fifteen; nine of my twelve other siblings were also adopted. We were all loved like crazy by prolifers who are always absurdly accused of not caring for children after they’re born.

Of course that bumper sticker mantra is just a political jab with zero truth behind it. It’s no different from the political attacks on adoption that are happening right now.

LGBT groups want to shut down faith-based adoption agencies. This is not hyperbole. But there is plenty of irony.

These groups are aggressively attacking people for who they are (Christians) and who they love (the nation’s most vulnerable children, in and out of the womb).

Faith-based child welfare providers, like Catholic Social Services and Bethany Christian Services, have been caring for our nation’s most vulnerable children long before LGBT groups ever even existed. But now, powerful multi-million dollar LGBT organizations want to ensure that these adoption agencies no longer exist unless they bow to their gender activism.

This is why I support the Child Welfare Provider Inclusion Act and the Aderholt Amendment. Neither prevents any homosexual, bisexual, or “transgender” individual from going to a multitude of agencies who will consider their eligibility for adoption. They specifically enable faith-based agencies to continue to carry on their religious call to care for the unborn, birthmoms, and foster children.

All of us are created by the union of a mother and a father. It’s not hateful or discriminatory to hold the inarguable biological reproductive process and subsequent model of parenting up as a reality. I have plenty of friends who are single adoptive parents. They’re amazing. But, when we can, a child whose biological parent(s) cannot or will not provide a safe environment for her should be able to have a mom and a dad. That’s not hate. That’s love. Does it make me singlephobic? I don’t hate single parents, whether biological or adoptive. It’s compassion that compels me to want the best for vulnerable children, as an adoption agency once did for me.

My multi-“racial” family (I put that in quotes because we’re just one human race) wouldn’t exist if it weren’t for faith-based adoption agencies. At a time when the National Association of Black Social Workers (NABSW) opposed transracial adoption (for any reason), faith-based agencies defied NABSW’s harmful, and racist, 1972 decree. NABSW still holds this tragic position.

But today’s titans of tolerance have none for Bible-adhering Christians who won’t change their beliefs. In Massachusetts, Catholic Charities was forced to end their adoption services because the state wanted to (illegally) force them to place children with same-sex couples. The same happened in DC. And now in Philadelphia, where faith-based adoption agencies were forced out of foster care contracts with the city because they’ve been practicing what they have been for decades—placing adoption-bound children in homes with a married mom and a dad or single Christian parents.

Two of the legal powerhouses behind these insidious lawsuits (here, here, here, and here) that are trying to force faith-based child welfare providers to assimilate or close are the ACLU and Lambda Legal.

So much for keeping kids first. The very same groups launching a nationwide assault on faith-based adoption agencies are the same ones who celebrate the abortion of millions—who could have been adopted—as faux “equality”.

The ACLU is unapologetically pro-abortion. The $100 million legal behemoth is proud to stand with Planned Parenthood, the nation’s largest abortion chain. It has tried and failed to force Catholic hospitals to commit abortions, you know, because abortion is so “pro-choice”. Apparently medical professionals should have no choice.

None of this stops those in the leftist ACLU from claiming that they are the ones who keep (the unaborted) kids first.

Never mind the ACLU has legally represented NAZIs, the KKK, terrorists, and NAMBLA pedophiles/murderers and made sure these dangerous individuals and organizations had their First Amendment rights defended. Their vile beliefs are worth protecting, but ohhhhhh no, not faith-based adoption agencies that care for (not exploit, molest, or kill) children. They must be stopped.

Then, there’s Lambda Legal, the LGBT legal organization that made the relationship between abortion and LGBT “rights” crystal clear in a 2005 national conference call. “Reproductive freedom and LGBT rights have been inextricably linked both legally and politically. The ties between these rights are so strong that we really believe that a threat to one directly and profoundly impacts the other,” Legal Director Jon Davidson explained. I wholeheartedly agree with that statement. Both political movements are rooted in pseudoscience. Both movements have no regard for the First Amendment. Both movements decry discrimination and inequality while celebrating the most violent form of it committed by a billion-dollar abortion industry that kills people for who they are.

Like the ACLU, Lambda Legal seems to think that adoption is to serve special interest groups, instead of a child’s best interests.

Adoption happens because of brokenness and is a selfless act that can bring wholeness and healing to the child and the birthparents. It creates forever families and unleashes purpose. Activists think discrimination is inherently evil. The adoption process is inherently discriminatory for a reason. I know this as an adoptee and as an adoptive father. A child doesn’t need to move from dysfunction to more dysfunction which is why prospective parents are heavily screened, investigated for any criminal background, and subjected to home studies to best assess their suitability.

The unborn, and our nation’s foster children, are the most vulnerable in our society. They need more compassionate child welfare providers who will help change the trajectory of their lives. They need more faith, hope and love—not less.