When a Public School Throws Its Invited Speaker Under the Bus

Ryan Bomberger
|
Posted: May 07, 2018 12:01 AM
Share   Tweet
The opinions expressed by columnists are their own and do not necessarily represent the views of Townhall.com. 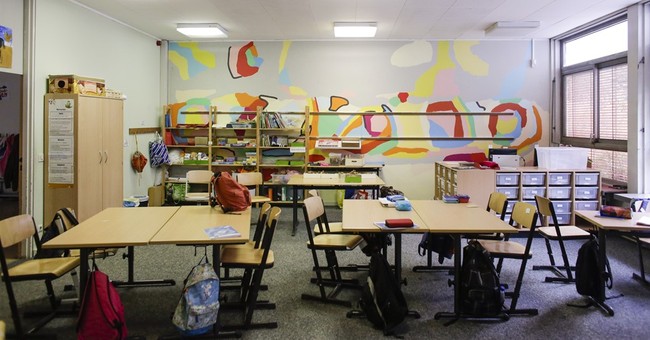 The aftermath of my recent life-affirming presentation at Vicksburg High School in Michigan showed that some leaders don’t believe honesty is the best policy. Despite some incredible feedback from students, parents and even teachers, the school decided to cower to a vocal minority of students and parents who detest who I am.

Contrary to the school district’s dishonest public statement, it wasn’t what was said at the assembly that caused the negative reaction. It was that some, who took to social media to protest me, discovered (gasp!) that I’m a Christian with a Biblical worldview on humanity who espouses a reasoned, thoroughly researched, and mostly secular perspective on social issues. Online protestors accused me of being “hateful”. That’s code for—you don’t agree with my opinion! The venom on Instagram (many posts had to be deleted) shows the level of “tolerance” from those demanding it (see here, here, and here). One student—Austin Pryor—compared my presentation to a hypothetical one given by KKK Grand Dragon David Duke. The same student told WWMT news: “I guess what he said wasn't ‘that’s bad,’ but when you Google his name and see he's homophobic and hateful like that, I don't really think you can bring that kind of person into a school."

I delivered the presentation according to the school-approved outline which detailed my story of adoption (a result of being conceived in rape), growing up in a multiracial family of 15, and believing that all lives—no matter their past or present situations—have purpose. I shared that we can all be stronger than our circumstances, how we should encourage one another even when it feels uncomfortable, and denounced racism by proclaiming that we’re one human race. Students were very responsive and enthusiastically participated in fun Q&A segments on stage to win free gift cards. The administration then publicly apologized for that same presentation, in a school-wide email to parents and on Facebook, falsely claiming that I didn’t deliver the speech I had agreed to:

The agreed content of the presentation was intended to be about finding purpose and inspiration in life, but the presentation given instead ranged into topics that were overtly political and were discomforting to many students and staff. High School Principal Keevin O’Neill sincerely apologizes for this and will be contacting the speaker and his organization to present his grievances. He will be happy to speak with anyone who wanted to give their feedback. We very much apologize that this event did not go as per the agreement and people were offended. We are taking steps to ensure it does not happen as future events are planned.

I’m a factivist, so I call out the school administration for lying. Blatantly lying. Here’s the outline approved by the school. Here’s the audio of the presentation given on Tuesday, in its entirety (minus 31 seconds where students sang a snippet of an Eartha Kitt song that could not be uploaded to SoundCloud). It’s obvious that the approved outline was adhered to, and there was nothing “overtly political” in the speech. I was instructed not to use words like “abortion”, “contraception”, “prolife”, “prochoice”, or “LGBT” anything…and I didn’t.

The school continued the dishonesty online: “We can assure you that the message that the High School had agreed to through repeated contacts with the speaker was one of inspiration, motivation, and unity. The actual content of the presentation was not in keeping with that agreement.”

Actually, the school never contacted me at all until 24 hours after posting the Facebook statements. A local organization in their area pitched my assembly presentation (which was offered for free) and coordinated the whole event with the principal. Neither the Superintendent nor Principal were present at the event. Ironically, the school proved one of the points of my delivered speech…they allowed the emotion of activism to take over the truthful context of factivism.

This is just a small example of what is a much larger cultural issue. Hate-filled, intolerant reactions take precedence over positive ones. Will there be a political and religious litmus test, now, for anyone who speaks to students in public schools? Superintendent Charles Glaes told WOOD TV 8: "… if you go beyond what was heard and look at the website, lots of people are going to be very alarmed. I don't believe there was any use of keywords that would have been very divisive. I just believe we have to do a better job of making sure that we don't bring in people who have a very strong political agenda."

Radiance Board Chair, Julie Klose, reminded our team of why we do what we do: “You are called Radiance for a reason. When light illuminates it exposes and wow, did it expose! I pray that even if there was just one student who the message resonated with and a future life was saved through Ryan’s measured and balanced message of life’s purpose, that it would all be worth it!”

One of the emails we received from a Vicksburg student sums up why public schools—all schools—need people to speak truth and hope to their students: “Your story inspired me a lot. It was amazing to hear about your family and how a lot of you guys are adopted. That every life has a purpose. I went through some crap last year and I'm still bouncing back from it. Basically, the point of telling you that is that I believed my life was worthless, that I was worthless because that's what the people around me made me feel, worthless. But you inspired me to continue getting back up again and that it will get better.”

That makes it all worthwhile.