Briefs: On the Weather, the Underwear Bomber, the Federal Fence, etc. 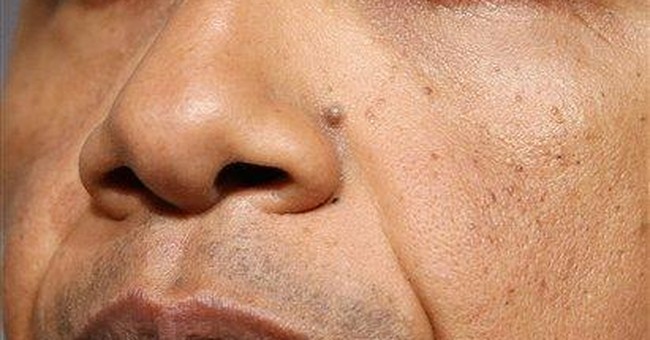 Brief items showing more or less (usually more) where we are....

-- First, Ft. Hood, then the Salahis in the White House receiving line, then (on a Detroit-bound flight) the Christmas Day underwear bomber, then Khost (Afghanistan) and the death of seven agents of the CIA. Imagine how the nameless they who rule the culture would be reacting if this were the administration of George W. Bush.

-- In the face of all this, the federal Environmental Protection Agency, having tightened regulations regarding the amount of water allowable in flush toilets, now is moving to reduce (from 2.5 gallons per minute) the amount of allowable water flowing through shower heads.

-- Among the lowlights of 2009 were the obeisant, apologetic bows the president made (a) in April to Saudi Arabia's King Abdullah and (b) in November to Japan's Emperor Akihito and Empress Michiko -- all emphatic non-Westerners. Oh, and the Queen of England? She merited not even so much as a presidential nod, though Michelle Obama did touch her on the back.

-- The University of North Dakota's Faculty Senate and the school's Anti-Racism Team support dropping "Fighting Sioux" and a corresponding logo for school teams. So do the state's board of higher education and the National Collegiate Athletic Association (NCAA). But supporting the name and the logo? Many of the state's Sioux. According to a legal filing against such a change from a group of Spirit Lake Sioux, numerous tribal members worry that eliminating the moniker "will cause isolation and a diminishing of public interest, knowledge, and respect for Sioux history."

-- Meanwhile, killjoys at the University of Colorado have banned Nerf guns that shoot sponge balls. So for their traditional game of humans vs. zombies, students dropped the guns and threw balled-up socks.

-- And speaking of Colorado, come November Denver's voters will decide whether the local government should establish an Extraterrestrial Affairs Commission -- you know, flying saucers and UFOs. Britain's military has just dropped a similar commission after 50 years of black holes and no positive leads.

-- Let's see: In Seoul, the heaviest snowfall in modern history. From Minnesota (-37 in International Falls) and Michigan's Upper Peninsula to Vermont, Florida and Arkansas, the deepest and most widespread cold snap in a quarter-century. Across Europe and the Asian landmass, record snows and lows. Must be global warming.

-- Are any newspapers gaining circulation? In the last audited year mighty few, and just one among the biggies -- The Wall Street Journal (up .6 percent), now the nation's largest circulator, given USA Today's 17 percent circulation drop. Is even the WSJ profitable? Notes owner News Corp.'s Rupert Murdoch, "Yes, but barely."

-- How is the federal fence (the Secure Border Initiative, aka SBInet) coming in the Southwest -- intended to thwart illegal crossings from Mexico? Seems certain federal agencies are blocking construction of certain segments. For instance, National Park Service staffers oppose U.S. Border patrol plans to construct some virtual-fence towers on wilderness lands along the border.

-- What possibly was the reason government-favored Wall Street banks (e.g., Citigroup, Morgan Stanley, and Goldman Sachs) received government allotments of swine flu vaccine in November, when the vaccine remained in extremely short supply across the country -- and unavailable to me and thee?

-- As Congress rushed through a $1.1 trillion catchall spending measure, things happened -- such as the $100,00 earmark Democratic Congressman James Clyburn added for the library in Jamestown, S.C. The money wound up in the coffers of Jamestown, CA -- a burg without a 'brary.

-- These days, congressional Democrats -- in secret and excluding Republicans in this ballyhooed (by Obama, Madam Pelosi, et al.) bipartisan hour -- are reconciling the House and Senate bills to socialize the nation's medicine. It's no little job, given the size of the bills. The 1,990-page House bill, for example -- longer than the Bible (1,291 pages) and "War and Peace" (1,225 pages) -- weighs 19.6 pounds. Yet maybe that's appropriate for a measure seeking to redistribute one-sixth of the nation's economy.

Finally, Indiana's Republican Governor Mitch Daniels takes the medal for his remark following the International Olympic Committee's decision -- despite Team Obama's full-court press -- not to award the 2016 Olympics to Chicago but to Rio de Janeiro. Perhaps this is progress of a sort, Daniels noted: Chicago "can't fix an election anymore."