Semantics Lesson: On the Meaning of 'Moderate' and 'Bipartisan' 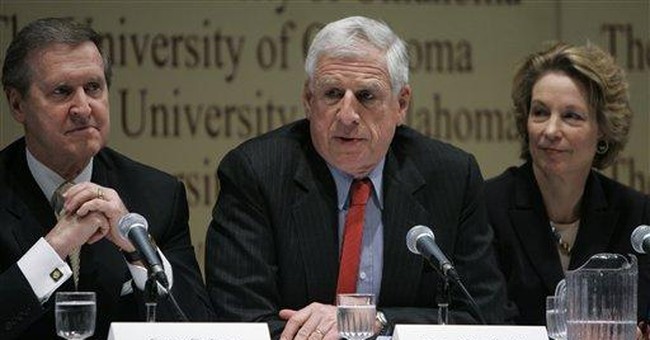 When they start throwing words like “moderate” and “bipartisan” at you, the best thing to do is duck.

Let’s begin with a semantics lesson and some facts.

Within the electorate, “conservative” is regarded broadly as an acceptable word, or label. “Liberal” (or, horrors, “leftist”) is not. Polls suggest that regarding the labels “conservative” and “liberal,” about twice the number of Americans describe themselves as “conservative.” Because these days “liberal” carries many negative connotations, those of that ilk have appropriated to their self-descriptive use such words as “moderate,” “centrist” and “mainstream” — even “independent.” Practically everybody loves a moderate.

A telltale? When “moderate” is deployed against”conservative,” as in: “Moderates defeated conservative efforts to open ANWR to drilling.” Or: “Conservatives overcame a coalition of moderates and liberals.” You’re about to be the recipient of a liberal message. Better duck.

The Republican Party is heavily conservative, the Democratic Party heavily liberal. Yet Republicans, as a group, are far more fractured ideologically.

The Republicans currently boast at least three camps: social conservatives (represented by for instance Mike Huckabee), economic conservatives (Mitt Romney), and national security conservatives (Rudy Giuliani and John McCain). The primaries feature a fight among those camps for dominance within the party — and ultimately the party’s presidential nomination.

For the party to have any hope of retaining the presidency in November, the two unsuccessful camps must bury their intra-party differences. If they don’t rally around the nominee, the party will lose to the Democrats.

The Democrats do not feature comparable ideological division: For the most part, excepting the likes of a Joe Lieberman, they are liberals of one very leftist mind. From Social Security and energy and the environment to illegals and taxes and the toxic Texan, they all say pretty much the same thing. All tend to regard global warming as a graver, more actionable threat than global terror. When asked by Charles Gibson in a New Hampshire debate to acknowledge that the Iraqi “surge” might be working, none would.

So to distinguish themselves from each other and to gain advantages in the race for the Democratic nomination, both Hillary Clinton and Barack Obama have played the race card. Senator Obama offers himself as prospectively the first African-American president, Sen. Clinton as prospectively the first woman. Mrs. Clinton offers herself as more “experienced” and, boasting pure leftist credentials, seeks incredibly to present as more moderate — as the centrist she demonstrably is not.

Obama, in his rhetoric about hopes and dreams, rolls out the word “bipartisan” — a lot. Time to duck again.

He repeatedly speaks of presiding over a “post-partisan” Washington climate, implying he could work more successfully with Republicans to achieve compromises acceptable to the mainstream on energy, on taxes, on Iraq.

Yet what he means is this: By electing him and more congressional Democrats, he and Congress (to a degree the present meager Democratic congressional majority cannot) could load liberals onto the federal courts, let the Bush tax cuts expire, throttle a return to nuclear energy, and pull U.S. troops out beginning yesterday. And never mind consequent slaughter and killing fields in Iraq to rival what happened following a “bipartisan” Democratic Congress’ abandonment of Southeast Asia in 1975.

In the contemporary lexicon, just as “moderate” and “centrist” have been redefined to mean “liberal,” so “bipartisan” generally stands redefined to mean “more liberal” — i.e., more leftist legislation in number and degree, more emphatic leftism (pacifism) in foreign and national-security policy, more institutionalization of leftist ideas.

So on the one hand in the Democratic primaries we have the oh-so-centrist warm and caring Hillary Clinton of the glassy eyes. On the other we have Barack Obama preaching bipartisanship while summoning the very partisan John Kerry to proclaim in South Carolina that Obama has been “right about the war from the beginning.” Even Congressman John Murtha admits the surge may be working. To continue to insist we never should have gone into Iraq, even on the verge of victory, is essentially to say we should give the place back to the jihadists. How bipartisan or moderate — or caring — is that?

Liberals rarely call themselves liberals, preferring to coo along as moderates. Yet Hillary Clinton and Barack Obama are ideological twins — not moderate but exceedingly liberal. And despite the words they toss around, both are less interested in working with Republicans bipartisanly than in electing more Democrats so Congress can ram through more leftist legislation.

So when they start throwing “moderate” and “bipartisan” at you, it’s time to put your hand on your wallet — and duck.