Robert Knight
|
Posted: Sep 01, 2020 12:12 PM
Share   Tweet
The opinions expressed by columnists are their own and do not necessarily represent the views of Townhall.com. 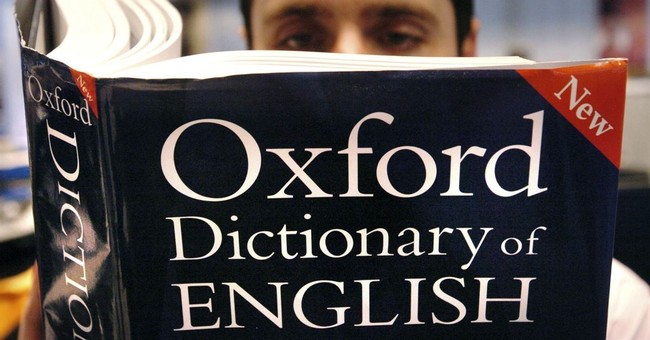 One of the most effective ways that Marxists advance their agenda is to change how we talk about things.   When clever rewordings replace the truth, it’s easier to fool people.

For example, the Washington Post this past week said a transgender plaintiff “was designated female at birth, but identifies as male.”

In the blink of an eye, a biological fact – that someone was born a girl – is brushed aside and replaced with a term that implies that male or female sex is assigned, not a natural phenomenon.

In fact, the idea that your sex is “assigned at birth” is an increasingly common description. It validates the Gnostic-based insanity that one’s sex has nothing to do with physiology, just what goes on in people’s heads.  By this reasoning, birth records can be altered to distort reality, which is a way to lie officially.  And to force others to do so as well.

Gavin Grimm, who is now 21, sued the Gloucester County, Virginia school district in 2015 to force them to allow her to use boys’ facilities.  Two years later, the case reached the U.S. Supreme Court but was set aside when President Trump overturned an Obama gender identity school mandate.

But last Wednesday, a three-judge panel of the U.S. Court of Appeals for the 4th Circuit ruled 2 to 1 that the school board had violated Grimm’s 14th Amendment right against sex discrimination. The high school had offered a gender-neutral bathroom, but the plaintiff’s attorneys rejected that solution, as did the two Obama appointees who sided with Grimm. A George H.W. Bush appointee dissented.

They drew from the bizarre Bostock opinion in June written by, of all people, Trump appointee Neil Gorsuch, which expanded the definition of “sex” in the Civil Right Act of 1964 to include “sexual orientation” and “gender identity.”  Just like that, the Court put every institution in America that won’t kneel to the LGBTQ gods in jeopardy of ruinous lawsuits or even governmental sanctions.

Given the Court’s reasoning, how could any sex-based distinctions, predicated on real and important differences between the sexes, be maintained? Sports teams? Locker rooms? Bathrooms at any business of any size? Private schools?

The transgender movement, for all its caring rhetoric, is not really about eliciting compassion for sexually confused people – something we should embrace. It’s part of the Marxist Left’s campaign to overhaul society and force people to lie.

Anyone not toeing the line, which keeps changing, is “canceled.”  That means being censored, fired, shut out of promotions or jobs, and de-platformed on social media.

Over the years, the Left has peppered our discourse with advocacy-filled descriptions. “Choice” long ago replaced abortion, “gay” replaced homosexuality, and “hater” and “racist” became all-purpose descriptors for anyone dissenting from the Left’s worldview. Erasing biology is just more of the same.

Sometimes, the ideologically-driven changes are more subtle. Journalists now capitalize racial terms, as in Black people and White people. The adjectives, which describe merely one important aspect of the human race, instead become the whole. No more thinking about people just as fellow human beings created in the image of God. Race must be first and foremost in everyone’s minds.

Herded into identity groups, we’re more easily divided and manipulated. Regardless of the impressive racial progress that America has achieved since eradicating slavery and Jim Crow, the media are utterly obsessed with race as the only aspect of humanity worth talking about.

But if America’s “systemic racism” is the main driver of the riots that have raged for the last three months, why are mobs beheading or defacing statues of Jesus and Mary and black heroes like Frederick Douglass or Arthur Ashe, burning churches and Bibles, and looting stores in Chicago’s Magnificent Mile?

There’s method to this madness. Racism is an excuse to pour gasoline on a larger cause – that of taking down America as we know it and replacing it with a socialist utopia. The founders of Black Lives Matter, after all, admit to being “trained Marxists.”

As Karl Marx himself said, “Keep people from their history, and they are easily controlled.” Hence, all reminders of America’s past must be erased.

During the AIDS epidemic of the 1980s (which is still with us), activists began forcing journalists and medical professionals to use the term “living with HIV,” as a way to de-stigmatize the disease. You could get kicked out of a medical conference for talking about “AIDS infections” or the “AIDS disease.” They’d not hesitate to beat the drums for “living with covid” if they thought it would advance their cause.

Language is a formidable instrument for human progress when used properly.  But, all too often it can be abused, destroying souls, families, or even entire societies.

The most profound and positive use of language in history was when Jesus offered Himself to everyone on Earth, saying, “I am the Way, the Truth and the Life,” and when the Gospel writer John referred to Him as simply The Word.

Amid the current chaos, we need to work hard to preserve America. And, we need to pray that the Marxist-inspired madness and abuse of language will crack up, a victim of its own hostility to truth.