A Bailout To Save Capitalism 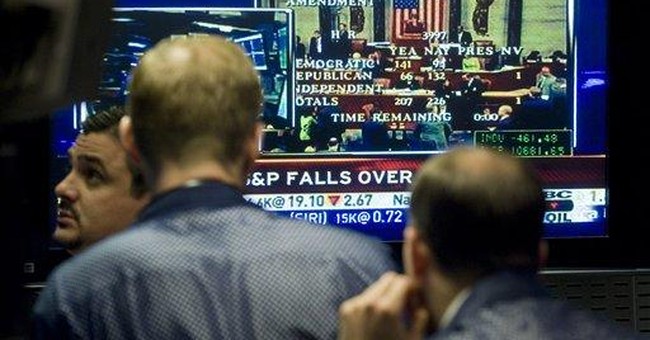 Opponents of the Henry Paulson bailout plan are prepared to try an economic experiment: Is it possible to have capitalism without capital?

The massive government intervention in the financial system represented by the embattled $700 billion plan has brought fiery denunciations of creeping socialism from the right and fierce attacks on welfare for Wall Street at the expense of the middle class from the left. All of this windy posturing might have a point if capitalism could operate effectively in the absence of a functioning financial system (it can't) and if it weren't proverbial Main Street that will ultimately suffer the direst consequences from severe financial dysfunction (it will).

The phrase the "real" economy has become a hallmark of the debate over the bailout. The "real" economy is implicitly contrasted with the "fake" economy of the financial world and identified with all things wholesome and solid. John McCain talks of the honest laboring man as the strength of America. No doubt he is, but presumably he wants to buy a house (which requires a mortgage), not pay for everything with cash (which requires credit cards), have a job (which requires a business that is very likely dependent on loans) and buy big-ticket consumer items he can't pay for upfront (which requires car loans, etc.).

Freeze up all those sources of credit, and economic life as we know it ends. Already, the financial panic has sent investors to the safety of Treasury bills, leaving less capital for consumers and businesses. No one seems to realize how much businesses rely on short-term loans for routine operations like meeting payroll, and how that most characteristic American entrepreneurial figure -- the guy with a bright idea he works out in his garage -- depends on investment and loans.

Conservatives who make so much of their knowledge of the markets would ordinarily be the ones to point this out, but they have a blind spot for the failures of the market. The financial system is subject to periodic panics that, if left to work their course, will wreak economic havoc out of all proportion to reason. They take down good institutions along with the bad. If it works, the Paulson plan's most worthy accomplishment will be saving innocent bystanders from the wildly swinging tail of the blind and panicked financial beast.

If conservative purists opposing the Paulson plan were to be consistent in their market fundamentalism, they'd work Ron Paul-style to eliminate the Federal Reserve and just accept depressions as the cost of doing business in a capitalist system, as we once did in the 19th century. We weathered the depression of 1893 -- fueled by the bursting of a railway bubble that devastated the banks -- so why can't we grin-and-bear-it through another one?

House Republicans will get the blame if the Paulson plan isn't saved. When the bill was brought to the House floor on Monday, 133 Republicans and 95 Democrats voted "no." That's a lot in both caucuses, but Democrats delivered a majority of their members in favor. Yes, House Speaker Nancy Pelosi was harshly partisan throughout the process. But that's not a good excuse. Too many Republicans followed the siren song of ideological fixity.

The financial crisis is so disturbing exactly because finance is so centrally important. Our sophisticated financial system -- inherited from the British -- has been one of the glories of Anglo-American capitalism. "The Bankers, accountants, investors, traders, and corporate officers whose joint efforts brought this system forth have changed the world far more profoundly than virtually any of their contemporaries," writes Walter Russell Mead in his book "God and Gold: Britain, America, and the Making of the Modern World."

Without this system, Britain and America wouldn't have risen to global pre-eminence, and consumer capitalism as we know it -- dependent on credit -- wouldn't exist. We may be about to find out what happens when it is rocked to its foundations.