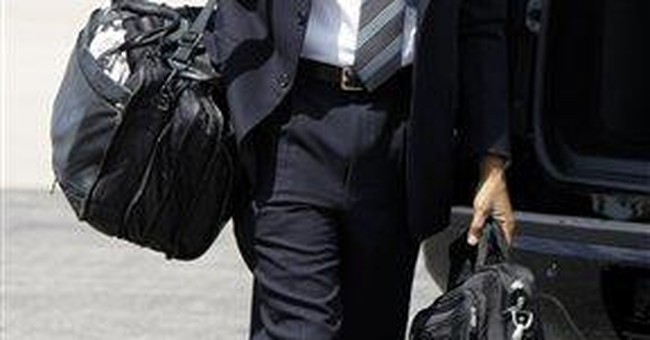 Barack Obama had a mini Bob Dole moment after the Saddleback presidential forum the other night. Asked on the Christian Broadcasting Network about a controversy over his opposition to legislation in Illinois protecting infants born alive after surviving abortions, an irked Obama replied, "I hate to say that people are lying, but here's a situation where folks are lying."

Obama's line recalled Dole's plaint on national TV after the first George Bush beat him in New Hampshire in 1988, "Tell him to stop lying about my record." Dole's outburst would live in infamy as evidence of his distemper. Obama's problem isn't his temperament, but the unsustainable exertions necessary to attempt to square his reasonable-sounding rhetoric on abortion with the extremism of his record.

Asked by Pastor Rick Warren when a baby gets rights, Obama said, "I'm absolutely convinced that there is a moral and ethical element to this issue." This is a crashing banality couched as thoughtfulness. If Obama is so sensitive to the moral element of the issue, why does he want to eliminate any existing restrictions on the procedure?

In 2007, Obama told the Planned Parenthood Action Fund that the Freedom of Choice Act would be the first piece of legislation that he would sign as president. The act would not only codify Roe v. Wade, but wipe out all current federal, state and local restrictions on abortion that pass muster under Roe, including the Hyde Amendment prohibiting federal funding of abortion. This is not the legislative priority of a man keenly attuned to the moral implications of abortion.

At Saddleback, Obama said determining when a baby gets rights is "above his pay grade." Leave aside that presidents usually have an opinion about who deserves legal rights. If Obama is willing to permit any abortions in any circumstances, he'd better possess an absolute certainty about the absolute moral nullity of the fetus.

He told Warren that he favors "limits on late-term abortions, if there is an exception for the mother's health." But the exception he wants is so broad it makes the restriction meaningless. Obama opposed the partial-birth bill that passed the House and the Senate, 281-142 and 64-34 respectively, and has criticized the Supreme Court for upholding the law.

It's not just partial-birth abortion where Obama is outside the mainstream, but on the Born-Alive Infants Protection Act -- the occasion for his televised accusation of lying.

In 2000, Congress took up legislation to make it clear that infants born alive after abortions are persons under the law. The National Abortion and Reproductive Rights Action League opposed the bill as an assault on Roe, but it passed the House 380-15. Back in the Illinois state Senate in 2001, Obama spoke out against and voted "present" -- effectively "no" -- on a similar bill, aligning himself with the tiny pro-abortion rump of 15 congressmen.

In 2002, Congress considered the legislation again, this time adding a "neutrality clause" specifying that it didn't affect Roe one way or another. The bill passed without any dissenting votes in the House or the Senate and was signed into law. In 2003 in Illinois, Obama still opposed a state version of the law. He long claimed that he voted against it because it didn't have the same "neutrality clause" as the federal version. But the National Right to Life Committee has unearthed documents showing that the Illinois bill was amended to include such a clause, and Obama voted to kill it anyway.

Confronted about this on CBN, he said the pro-life group was lying. But his campaign has now admitted that he had the legislative history wrong. Obama either didn't know his own record, or was so accustomed to shrouding it in dishonesty that it had become second nature.

Here's one of the central dilemmas of Obama's candidacy. Nothing in his career supports his contention that he's a post-partisan healer. So, as someone as splenetic as Bob Dole might put it, he's forced to lie about his record.

Here's What's At Stake If Smith and Wesson Loses Its Case Against New Jersey
Townhall
Katie Pavlich notes that the Biden White House called a lid today at 1:48 p.m.
Twitchy
Lori Lightfoot Gives the Game Away on Democrat 'Trust the Science' Arguments in MSNBC Interview
Redstate
The COVID-19 Test No One Is Talking About: Make Sure Your Children Have It Before They Are Vaccinated
PJ Media