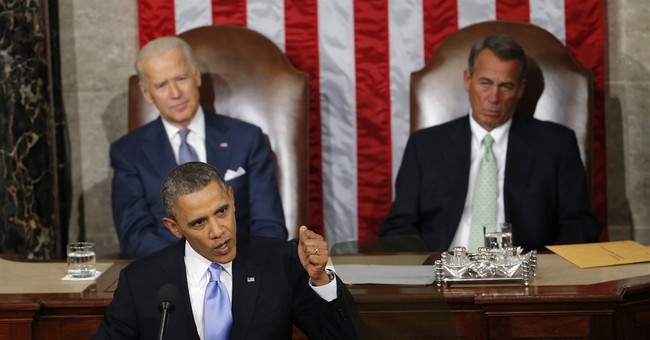 Not content with overseeing the largest - in terms of both numbers and scope - seat losses by any President in American history during his term, Barack Obama has set his sights on causing potential nominees for his office to have to run against his schemes in 2016.

President Obama's annual State of the Union address (SOTU to Washington, DC based Tweeters, saving 14 characters) is scheduled to be delivered tomorrow night in a joint session of Congress in the House Chamber.

The same geniuses at the White House who concocted the politics and policies that allowed Republicans to gain the largest majority in the House in three generations and to take control of the U.S. Senate by winning a net nine seats in the last election have decided that they can utilize the "bully pulpit" of the Presidency to keep the GOP back on its heels in spite of its large majorities.

The plan began the day after the elections when the President held a press conference to say that he was discounting the whole exercise because only about 36 percent of eligible voters turned out.

"To everyone who voted," Obama said, "I want you to know that I hear you. To the two-thirds of voters who chose not to participate in the process yesterday, I hear you, too."

President Obama and his staff have determined that he and he alone must be the voice of those non-participants. They didn't stay away because of Conservative plots to keep minorities from voting. They stayed away because neither party - and that includes Obama's Democrats - gave them a reason to spend maybe one hour of the 8,760 hours available to them over the course of a year to vote.

Remember that Obama said during the run up to the elections that even if his name wasn't on the ballot, his "policies are on the ballot. Every single one of them."

He also helped out Democrats struggling for re-election by saying, according to reporting in The Hill newspaper:

"lawmakers avoiding him on the campaign trail were 'strong allies' who have 'supported my agenda in Congress.'"

And we know how that all worked out.

The White House brain trust believes that approach was so successful that they are now "paying it forward" by having the President announce his version of tax reform is, as reported in Bloomberg.com

"proposing new taxes on the wealthiest Americans that would limit their profits from investments and make it harder for them to pass assets to heirs."

Bloomberg points out that his plan would raise the tax rate on capital gains - income from investing in things like new companies - "to 28 percent from 23.8 percent."

Ok, a 4.7 percentage point increase might not sound so bad, even though it is a 17.6 percent increase. But, Bloomberg reminds us that it is even worse:

"The rate was 15 percent when Obama took office in 2009, meaning that he's proposing to almost double it over his two terms in office."

The percentage or percent increase in this tax or that is not that important because, as we might have mentioned before, the House and Senate are firmly in the hands of Republicans and the few remaining Democrats have learned the hard lessons of just how wet become those who have walked the political plank on behalf of Obama policies.

It would be amusing for Senate Majority Leader Mitch McConnell (R-Ky) to bring Obama's tax plan to the floor and force Senate Democrats running for re-election in 2016 to spend the next 22-or-so months defending a vote to increase taxes on investors and on death taxes.

House Speaker John Boehner (R-Oh) should do the same thing in the House if only to get House Minority Leader Nancy Pelosi (D-Ca) on the record defending forcing her caucus to support it.

Moreover, it will make Hillary Clinton and other non-announced candidates for the Democratic nomination for President to have to run against Obama and his tax plan, or support it and risk a 2014-style revolt by the voters.

Barack Obama is determined to force the Democratic Party to become the American version of the Socialist parties in Europe who believe it is better to wreck the economy for everyone equally than to have some people become - and remain - successful.

On the Secret Decoder Ring page today: Links to the Hill Newspapers' reporting on the President's pre-election remarks, and to Bloomberg.com's analysis of the Obama tax plan.

Also the Mullfoto is a screen grab showing the type of spam with which I am being targeted.