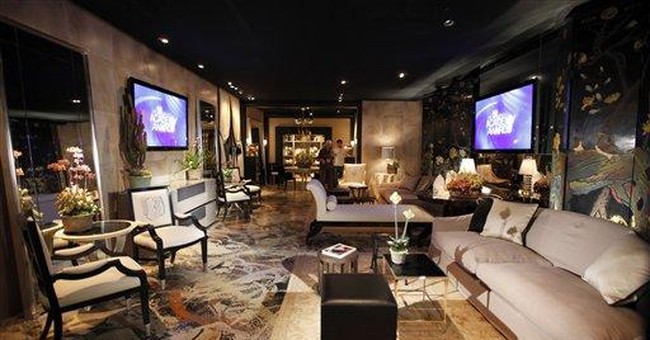 Let me start by saying that I like Hillary Rosen. She's not a friend of mine, but she is an acquaintance and we have worked together on various projects over the years.

Let me continue by saying, what she said about Ann Romney was just plain dumb.

I wasn't there, so I don't know what she said or didn't say in the Green Room but it the concept is correct.

A Green Room may or may not be painted green. According to Wikipedia, the term may harken back to the 16th Century:

"One story is that London's Blackfriars Theatre (1599) included a room behind the scenes; this room happened to be painted green"

Hence my use of the word, "harken."

In modern parlance a Green Room is where guests on (typically) a TV show gather and chat prior to going on the air.

In Cable News time is divided into 4½ minute segments from about 6 AM to 11 PM. Green Rooms in Washington, DC tend to be populated with people I may have known for 20 or 30 years.

Paul Begala and I have become actual friends because of the hours we've spent together in Green Rooms. Same for Donna Brazile and Bob Beckel. James Carville was my backdoor neighbor for years.

Think of it as being a professional football player.

If you are an Eagle, or a Packer and I am a Redskin or a Cowboy when we are playing each other - when the game clock is on - our jobs are to knock each other on our butts.

It's not personal. It's what we do.

The point is, we don't carry a grudge after the game is over. If we talk about the game at all it will be on a very technical level: "If I had gotten off on my left foot on that third and long in the fourth quarter …"

That's how we relate to one another in the Green Room. We don't try to convince each other of the virtue of our position over the other; if we talk about politics at all it is on a very technical basis: "If the President would have made that speech in Sarasota on Tuesday instead of Kansas City on Wednesday …"

For fans the game is never over. That's why talk radio lives.

In the Green Room we will often talk about what we are going to say on the air, just so we can calibrate the discussion. The producers have typically emailed us with three or four likely subject areas, so when the host asks a question we are not caught flat footed.

I will only go on the air with people I know. Someone who is billed as a "Political Strategist" and whose political background is limited to being a senior staffer on the Ag Committee in the New York State Senate in Albany will not be able to keep up with Brazile, nor Begala.

For the most part we are careful to stay in bounds which is to say, we don't accuse the other person of having said something different in the Green Room than what he or she is saying on the air.

Had I been in the Green Room with Hillary Rosen on the evening she said what she did about Mrs. Romney I would have cautioned her about dragging a candidate's spouse into the debate absent he or she having inserted themselves.

I don't know that she would have taken my advice, but I suspect it would have been in the back of her mind when she went on set and she might have softened her statement.