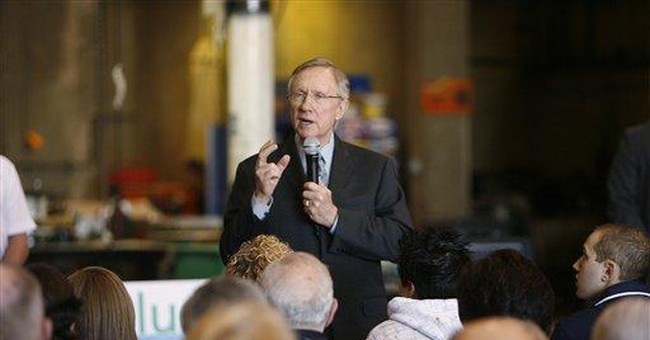 Many of America's major news outlets and polling firms published their biennial Labor Day polls telling us what's what as we move into the mid-term elections.

That doesn't exactly do justice to the straits in which Congressional Democrats find themselves.

Here's why. The poll analysis by Dan Balz and Jon Cohen starts with this paragraph:

"Republicans are heading into the final weeks of the midterm campaign with the political climate highly in their favor."

"Among all voters, 47 percent say they would back the Republican in their congressional district if the election were held now, while 45 percent would vote for the Democrat. Any GOP advantage on this question has been rare in past years."

"But wait," as Billy Mays used to say, "there's more!" Or maybe it was the Pocket Fisherman guy. Anyway, buried at the end of that paragraph is the stat that should have led the entire piece:

"Among those most likely to vote this fall, the Republican advantage swells to 53 percent to the Democrats' 40 percent."

Well, that's newsworthy, isn't it? A 13 percentage point lead on the generic vote for Republicans … in September? Unprecedented, I think.

In October, 1994 the Democrats led Republicans among registered voters by 48-44. A month later, Republicans won control of the House with that whole Newt Gingrich, Contract with America thing.

The Wall Street Journal/NBC News poll had a similar finding. According to the analysis written by Gerry Seib:

"When voters overall are asked whether they prefer that November's vote produce a Congress controlled by Democrats or by Republicans, they split evenly, 43% favoring Democrats and 43% Republicans.

"But among those who appear most likely to vote, Republicans own a dramatic 49% to 40% advantage. If that kind of lead holds, Republicans would almost certainly take back control of the House."

And Bingo was his name-oh.

The CNN/Opinion Research Corporation poll shows that people who self-identify as independents appear to have made up their minds:

"Sixty-two percent of independents questioned say they would vote for the generic Republican in their district, with three in 10 saying they'd cast a ballot for the generic Democrat."

More bad news for the Ds? Ok. You may remember that following the primaries in late August, I wrote about the fact that far more Republicans had voted primaries than Democrats.

I was more-or-less making that up, but it turns out I was correct. According to American Unversity's Curtis Gans, "Republican turnout in their statewide primaries exceeded Democratic turnout in theirs by more than 4 million votes" which USA Today said was "statistical proof of the 'enthusiasm gap' that pollsters and pundits have been talking about."

Gans wrote that was the first time more Republicans have voted in mid-term primarys since 1930 which is when Democrats were still new at blaming Herbert Hoover for everything.

What's behind this? The LA Times' editorial board put its collective finger on it over the weekend when the Times published an editorial pointing out that according to Friday's statistics, "14.9 million people unemployed, in addition to the 8.9 million who are employed part time because they can't find full-time jobs."

The Ds, according to the LAT, were slow to respond when "having counted on last year's $787-billion stimulus package to revive the economy, joblessness continued to increase through much of 2009."

The House and Senate will be back today and, having spent six weeks listening to the economic woes of their constituents, will be desperate to show that this time they really, really do care about unemployment.

Here's a good idea: Every Representative and Senator and every Committee should reduce the number of staff by 10 percent, immediately - sort of like cut-down day in the NFL.

They won't be allowed to replace those people until the national unemployment rate drops to under five percent. It will save us money and will help the Members and their staffs understand what life is like in the real world.