Getting Closer to the GOP Nominee 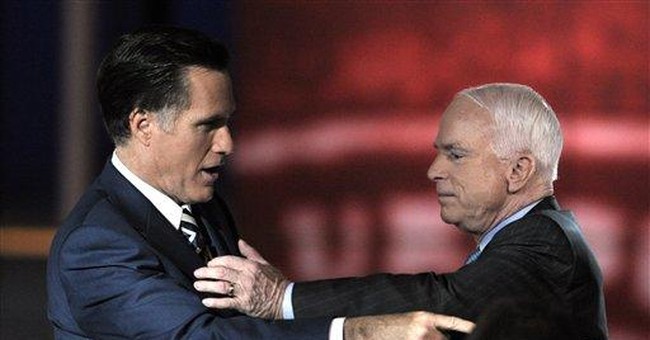 I am now persuaded that Sen. John McCain will be the Republican nominee. I am neither rooting for nor against him, but that is the way it appears to me.

Having written that, let me remind you that just the other day I pointed out that when making these kinds of predictions I am correct precisely 50% of the time.

I gave a speech to a group of donors to the Republican National Committee the other night and told them that the perfect candidate - if there ever was one - no longer existed and they were going to have to get in behind whomever ends up with the nomination.

The Conservative Talk Radio World has its collective knickers in a twist about McCain but they will have to answer the same question as everyone else: Is a flawed McCain better or worse than President Hillary Clinton? Or President Barack Obama?

Among the many things I have been wrong about in the past 10 days was the effect of endorsements in this campaign. The night that Florida Governor Charlie Crist I went on Hannity & Colmes with Bob Beckel and said, underestimating the Crist endorsement, that "Charlie Crist is no Jeb Bush."

Perhaps true, but Jeb didn't endorse anyone and Crist did so, in the way of senior political pundits everywhere, I was then quoted by the Associated Press after the Florida primary as saying while Romney had benefited from the demise of the Fred Thompson campaign, "Whatever surge Romney was getting, Crist stopped cold in its tracks," Galen said.

Getting back to the Conservative angst about a McCain candidacy, Dr. Jack Pitney, professor of government at Claremont McKenna College in California - whom I have known forever and respect greatly - was quoted after both Rudy Giuliani and Gov. Arnold Schwarzenegger endorsed McCain thus: It is natural that McCain, Giuliani, and Schwarzenegger would end up on the same side. They all have centrist positions, smart-aleck styles, and outsized egos. The Moderate Musketeers are as likely to fence with their own partisans as with the Democrats.

Being a "smart aleck" is no disqualifier for being President and having an "outsized ego" is pretty much a basic requisite for the job.

The exit polls from Florida indicated that McCain and Gov. Mitt Romney tied among Republicans. McCain won handily among independents who registered Republican to vote in the primary.

No one can win the Presidency by only getting votes from his or her party's base.

If I were advising the McCain campaign - which I am not - I would be telling them that they should spend the next few days in the run-up to Über Tuesday talking about the fact that it is McCain's ability to attract high percentages of independents which is crucial to designing a winning strategy for next November.

I suspect McCain will be declared the winner next Tuesday by virtue of having won New York (winner-take-all) and the majority of delegates in California (Congressional District by Congressional District) and enough of the rest of the states to be on that trajectory toward the nomination I was talking to you about the other day.

Mitt Romney will do the right thing and stand aside sometime next week leaving John McCain, Mike Huckabee and Ron Paul as the only three candidates still standing.

Ron Paul is and has been a fringe candidate from the get-go and Mike Huckabee hasn't won anything since Iowa.

In modern political history, former Texas Governor John Connally was known has having spent $11 million during the 1980 campaign for President and winning only one delegate.

Rudy Giuliani, according to the Associated Press, spent nearly $49 million in his campaign and matched John Connally's total of one delegate.

Campaign finance reports which were due yesterday showed that Mitt Romney lent his campaign $18 million in the 4th quarter of last year bringing Romney's total of self-funding to about $35 million. That does not count what he may have - or will have - lent his campaign in 2008 by the end of next week.

Like him or not, Romney gets kudos from me for putting a very significant amount of his own money where his campaign is.