Orange Ya Glad for Florida? 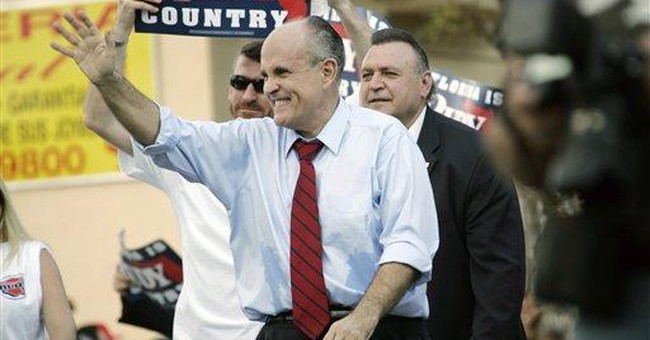 Florida will hold its primary on January 29 in what the Washington Post's Dan Balz calls "the first Republican primary closed to independent voters, who have provided [Sen. John] McCain with his margins of victory in both New Hampshire and South Carolina."

To review the bidding, McCain beat Mike Huckabee on Saturday in South Carolina by about 14,000 votes 33% - 30%. Fred Thompson came in a distant third with about 16% of the vote. Romney with 15% came in fourth. As you know I have been a paid advisor to the Thompson campaign.

Huckabee the former Governor of a Southern state was counting on a win in South Carolina to offset third place finishes in both New Hampshire and Michigan. Whether because of the snow in the Greenville-Spartanburg area or Thompson's siphoning off nearly 70,000 votes it didn't happen.

McCain needed a win in SC to demonstrate that his strong win in New Hampshire was not just a one-off reprise of 2000. That did happen.

The general feeling of the national press corps which had descended on South Carolina was that Huckabee had made a strategic mistake in competing in Michigan which is Romney's home state. The chatter was that Huckabee believed Romney was in free fall (after coming in second in both Iowa and New Hampshire) and McCain (who had not competed strongly in Michigan) might split the moderate vote allowing Huckabee to buy a "surprise" second place finish on the cheap.

Huckabee came in third at the cost of four days of campaigning which might have been put to better use in South Carolina.

Romney bailed out of South Carolina after his Michigan win did not produce a bounce and took his effort to Nevada where he easily won the majority of delegates available as the result of the caucuses there.

On the Democratic side (whose primary in SC will be held this coming Saturday) Hillary Clinton got credit for a win in Nevada by beating Barack Obama 5,355 to 4,773 - a margin of 582 votes. However, because of the way the caucuses are constructed, Obama actually ended up with on more delegate than Clinton 13-12.

Obama's campaign didn't properly set up the press corps to report the delegate count rather than the popular vote, so Hillary will be remembered has having won the Nevada caucuses.

Wins and losses in this game are more a measure of how a candidate does against what the press corps thought they were going to do, than the realities of the outcome.

As I have described before, it is like corporate earnings reports on CNBC: If a company posts a profit of $1.62 a share for the previous quarter they have clearly shown a profit. If, however, "the Street" thought that company should have posted a profit of $1.64 a share, then it will be reported that the company had a bad quarter.

Moving forward on the GOP side, Florida will be the first full test of the Rudy Giuliani campaign. He stuck his toe into the chilly waters of both Iowa and New Hampshire, but his general strategy has been to make a splash in the warmer waves in Florida.

McCain is fully engaged there as well, but it is not clear as to whether Huckabee, Romney or Thompson will compete in Florida.

An excellent case can be made to allow McCain and Giuliani to duke it out in Florida there at the cost of millions of dollars (which might well bankrupt the loser) while the other campaigns look to Super Tuesday on February 5 and attempt to pick off potential wins among the two-score states which will be in play on that day.